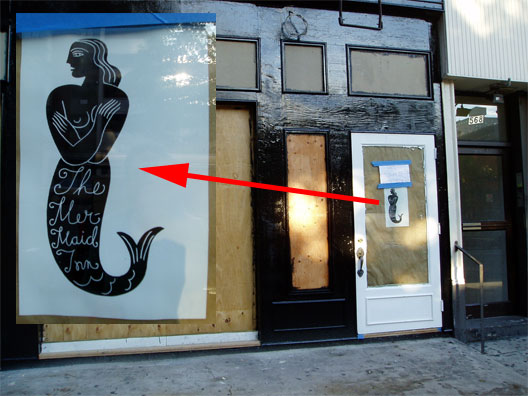 Initial Debut Projection: October
Current Debut Projection: November
Odds, On-Time Arrival: 3-1
Eater Projected Opening Date: 11/9/07
It's hard to think of a fall opening that has engendered as much excitement in the Eater inbox than this, an uptown branch of the popular East Village fish restaurant The Mermaid Inn. Certainly that has something to do with the continued need for good neighborhood restaurants in this area, which has area residents quite excited. Sample emails: 10/12: "on the UWS where Pair of 8's was (or the restaurant that went bust next door) there has been a lot of activity—and today as I walked by there was a piece of paper posted in the window that read Mermaid Inn (complete with mermaid logo). Magnolia Bakery and now Mermaid Inn—don't know if this is good or bad news for the UWS, but it'll be interesting." 10/23: "I was walking down Amsterdam avenue today when I noticed a large, familiar black mermaid in the window of an otherwise boarded-up storefront. Apparently, an uptown branch of the Mermaid Inn will be opening on Amsterdam between 87th and 88th!" 10/24: "Hi, walked by the new UWS Mermaid last night and was able to peek inside, looks like they're nearing completion on wall treatments and paint. Couldn't see the kitchen, but everything looks crisp and clean. Dining area is not huge, hopefully they'll have out door seating. Yippie, something good to eat 3 blocks from home!" Sources at the restaurant tell us the place is on track for November.
· Mermaid Inn Opening on UWS in Fall 2007 [themermaidnyc.com]