Above, as seen on Essex Street (between Stanton and Rivington), the quirky lock that's barring the door at 133 Essex Street, née Evan Ford, the latest Hell Square creation from Rob and Will Shamlian, the gentlemen that brought us the Dark Room, Fat Baby, and the surprisingly solid Spitzer's Corner. Things to recall about this new venue, at one point known as Evan Ford: first, that it's going to be "rockabilly bar/restaurant" with—well, if they can pull it off—a mechanical bull; and second, that when last we left the Shamlians, they were arguing in front of a community board that, uh, the signatures on their liquor license application weren't faked. Ahem. 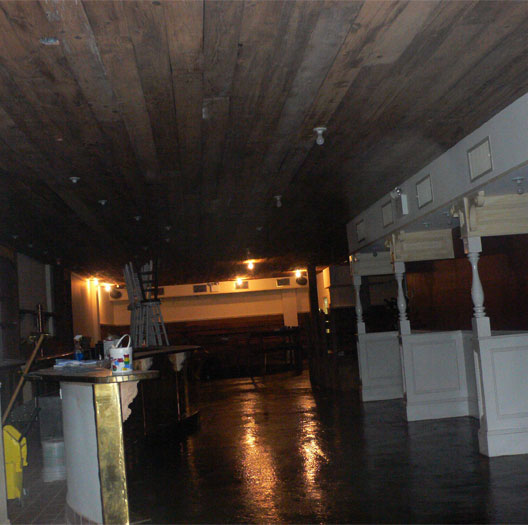 What do we have here? Bar at left, and what appear to be booths at right. And do note the wood aesthetic of the ceiling, which echoes the decor at Spitzer's Corner. Nice choice.

So what don't we see here? Well, a mechanical bull, for one thing. Which makes sense, because we assume that there will be a gala parade down Ludlow Street the day it arrives. If, you know, they're actually going ahead with the plan to put one in.

The other thing? That pesky liquor license. At the September meeting of Community Board 3, the board voted "to ask that the State Liquor Authority to investigate allegations by residents of misrepresentation by this applicant in his application to Community Board 3, specifically, that this applicant provided the community board fraudulent signatures in support of his application." From what we can tell, the issue didn't come up at the SLA this month. So for now, Evan Ford sits empty, and we wait, with dreams of mechanical bulls dancing in our heads.
· Dept. of Inevitability: Hell Square Scoring Mechanical Bull [~E~]
· First Word: 133 Essex Street [~E~]