Share All sharing options for: The Shutter: Core 191, Novo

Hide the children—it's time for another edition of The Shutter, covering bar and restaurant closings around town. Closings to tips@eater.com, svp. 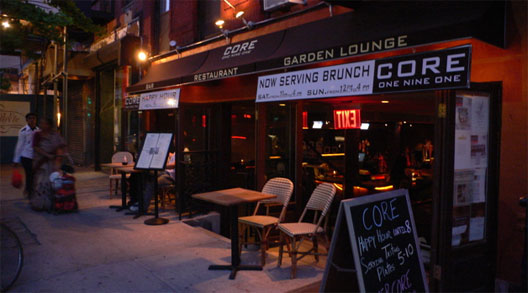 [Core 191 back in May, when that egregious, desperate specials signage went up]

1) Lower East Side: Core 191 is doneski, reports TONY's Feed blog. A little background for newcomers: the space, at 191 Orchard Street, might be the most haunted in New York City these days. In recent years, a parade of places—let's see, there was Matthew Kenny's Heirloom, before which there was Cafe Lika, which grew out of the ashes of, uh, Mooza—and all this was before Jason Pomeranc decided to build a giant hotel on the block, which has rendered the area a complete shitshow for the better part of the last two years. With the hotel now nearing completion—and a space with one of the prettiest back gardens in New York—perhaps an enterprising entrepreneur can make some magic here? The next to give it a go: the folks behind 200 Orchard, who plan to open The Sixth Ward, a beer bar, in the space. And life in Hell Square continues apace. [The Feed]

2) Hudson Square: After attempts by Kamali to give this place the Hard Sell, a tipster emails that Novo has finally called it quits. [Shutter Inbox]