1) Back Forty: Though it's de rigeur for chefs these days to source their ingredients locally, Peter Hoffman's efforts pre-date the trend. The chef/owner of Savoy unveiled his new restaurant Back Forty yesterday, where he and chef de cuisine Shanna Pacifico are serving a "tavern menu" filled with seriously appetizing-sounding dishes like grilled Catskill trout with cilantro salsa verde, red Maine shrimp and bacon beignets and roasted pumpkin with ancho pepper and maple crème fraîche. 190 Ave B at 12th St; (212) 388-1990 [Eater Inbox] 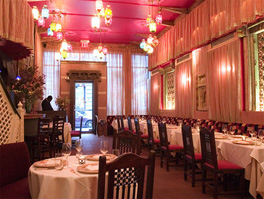 2) Devi: Suvir Saran and Hemant Mathur's much loved Flatiron Indian will be born anew this Monday, as was mentioned a few weeks back. You may recall that the talented duo had purchased the restaurant from owner Rakesh Aggarwal after he closed it in August. They're taking rezzies now. 8 E 18th St between Fifth Ave and Broadway; (212) 691-1300 [Eater Staff]

3) Hi-Life Restaurant & Lounge: There's life again for the UES outpost of Hi-Life. The restaurant, which has a brother eatery on the UWS, was displaced from its home a while back but found a new location on Second Avenue and 78th Street. From Flo Fab, we learn that the new incarnation will serve "a menu of American brasserie specialties." 1503 Second Ave at 78th St; (212) 628-5433 [TONY; Flo Fab]

5) Cafe Blossom: Blossom in Chelsea, one of the few fancy vegan eateries in the city, has spun off an UWS outpost. The offerings here are similar to the original location: raw and cooked vegan dishes, dairy-free pastries and organic wine and beer. 466 Columbus Ave between 82nd and 83rd Sts; (212) 875-2600 [Kosher NY; TONY]