Kalina On Assignment: Fergus Henderson, in chef's uniform, middle, at the Spotted Pig

The livers of New York's foodtelligensia are thanking their lucky stars this morning, the day after Fergus Henderson's three-day promo-blitz for his new book, Beyond Nose to Tail, has come to a close. For the uninitiated, Fergus Henderson is the legendary UK chef, whose first book From Nose to Tail put offal on menus all over the world. Here now, a look at the week that was:

1) Monday: Things were civil enough on Monday night, when the offal-obsessed Brit hosted a launch party for his new book "Beyond Nose to Tail Eating" at the Spotted Pig. Camapari cocktails were served, April Bloomfield doled out portions of suckling pig from a table in the dining room and Fergus signed books and chatted amiably. From there, as all chefs visiting NY are sworn to do, he went to sup late-night at Momofuku Ssam Bar.

2) Tuesday: Day 2 found the chef cooking dinner at Peter Hoffman's restaurant Savoy in Soho. The reservations were gone before the ink on FloFab's announcement in the Times was dry. The after party on this night was at Back Forty, Hoffman's East Village outpost that is scheduled, and likely, to open next week.

3) Wednesday: The press tour part of Fergie's trip to New York ended with a real blow-out, back at the Spotted Pig. First, two no-reservations seatings of Fergus fare—cooked by April Bloomfield and her team, we'll note, not really by Henderson himself. Amusing host stand quote: "I'm sorry, sir, but the second and third floors are completely full. No to worry, though: there are plenty of chefs on the first floor, too." 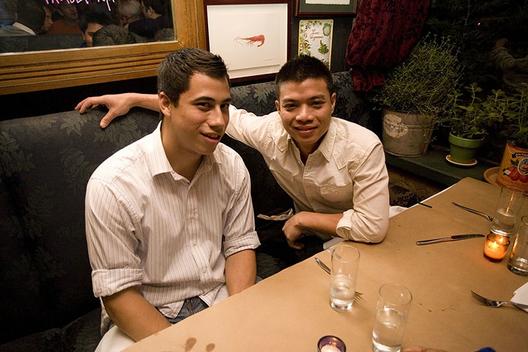 Kalina On Assignment: Top Chef Hung, with manfriend, on the first floor.

Next, after the hoi polloi were dispatched to the streets in dangerously close proximity to MePa, the afterparty got underway, and the place was filled nose-to-tail with everyone who's ever had anything to do with food ever. Also, all the Top Chef chefs. On the third floor, drinks flowed, primarily into Dave Chang. Ken Friedman, gracious overlord of the Pig, who had been pimping and promoting this party for a week, was everywhere. An excerpt from the guest list: Tom Colicchio, Alfred Portale, Jean-Georges, Alice Waters, The Chang, Sue Torres, David Pasternack, Marco Canora, Mark Ladner, Wylie Dufresne, Gabrielle Hamilton, Bette Midler, Ilan Hall, Joe Bastianich, Tony Liu, Damon Wise, Dan Silverman, Pichet Ong, Anita Lo, Zac Pelaccio, The Lovely Gail Simmons, Kate Krader, Jeffrey Steingarten, Alan Richman, Andrea Strong, Andrew Knowlton, Cutlets, Heath Ledger, Josh Pickard, John McDonald, Josh Capon, and legendary U2 manager Paul McGuinness. 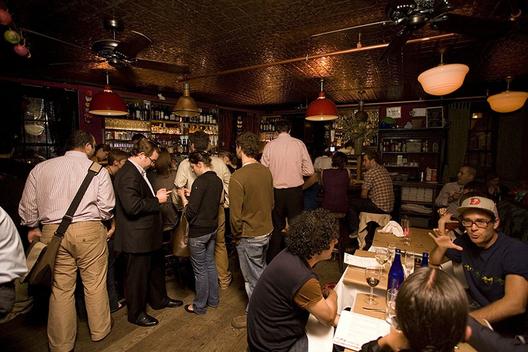 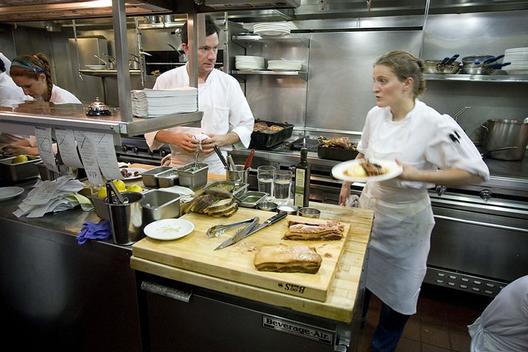