We had so much pleasure teaming up with the gang at Curbed yesterday for that hotel/hotel restaurant update, we thought we'd go it again. Above, the current vista outside Robert DeNiro & Co's much-anticipated Greenwich Hotel (f/k/a Downtown Hotel), slated to throw open its doors in Tribeca early in 2008. As Curbed reports, the buzz factor here is positively squeaky, but that's not what concerns us just yet.

Rather, as you may recall, the lobby restaurant will be none other than Ago, the Miami and Los Angeles Italian hotspot—sporting a ceiling that's rumored to be comprised of nine million wine corks, no less. So when Eater operatives recently passed by and saw one of the doors to what appears to be the restaurant space yawning open (above), do you think we took a look inside? 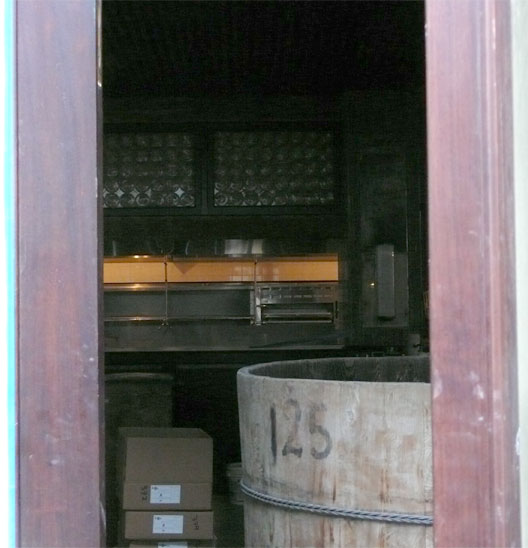 Okay, a bit of a letdown. And then they slammed the door in our face. But do take stock of what we're given here. First, row upon row of wine bottles, seemingly used as a design motif, which lends stock to the ceiling corkage rumors. And the fact that, if they're already at this detail stage of the interior design, the whole joint might actually open sooner than we think. Consider this puppy upgraded to full-time surveillance from here on out.
· DeNiro's Greenwich Hotel to Squeak When Walked Upon [Curbed]
· Rumor du Jour: Ago Coming to DeNiro's Downtown [~E~]