The theme for today is restaurant survival. All day long, we'll be running items on venues that have, for one reason or another, out-lived their expected life span or Deathwatch sentence. We may obsess over a venue's demise now and then, to be sure, but we can certainly appreciate a good survival story as much as the next guy. 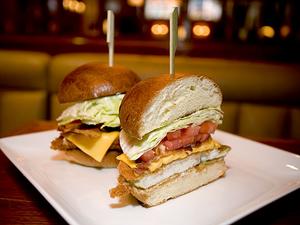 A visit to the dining room of Lure Fishbar in the summer of 2005 would have revealed a restaurant on the verge of something, perhaps concept revision followed by closure. It wasn't empty, but it sure as hell wasn't full -- a delicate state of affairs for a venue paying dearly for its choice Mercer and Prince Street location and trying to recoup the costs of its pricey nautical-themed interior build out. But, then, in the winter of 2006 came the Great Prada Fire, which, miraculously, saved Lure. They got to close and retool on their insurance company's dime.

Upon their re-opening, not only had the added a full sushi bar -- always a Soho crowd pleaser -- but John McDonald and his chef Josh Capon had come up with a very serious burger (now a genuine draw), to complete one of the more versatile menus in town. Now, they're at it again, this time with the Lure Crispy Chicken Club (marinated chicken breast, lightly fried, crispy bacon, american cheese, lettuce, tomato and mayo).

"This sandwich started out as something Josh [Capon] would make just for me, yet soon, friends who tried it insisted on ordering it when they returned," John tells Eater. "Sometimes you just can’t beat the classics. Nothing better than a toro scallion roll followed by one of these sandwiches for lunch."

Like the Lure Burger, the chicken sandwich has fast food genes, namely, those of the Wendy's Spicy Chicken Sandwich. Necessity, once again, being the mother of invention.

Photo by the Kalina.