Week in Reviews: The Deuce for Mai House, Ramsay a Snooze

Share All sharing options for: Week in Reviews: The Deuce for Mai House, Ramsay a Snooze

1) Frank Bruni gives Drew Nierporent and Michael Bao Huynh's Mai House two stars today, which marks an upgrade from one for both gentlemen, at Bao 111 for Huynh and at Centrico for Mr. Drew (who is no stranger to stars, but slumped of late at Centrico). For Bruni, the highs are high enough and the lows are not too low, which is the stuff of a deuce:

Combining Vietnamese flavors with other Asian influences and many of the go-to meats of the moment, Mai House produces an unusually appealing roster of dishes, the best of which make statements at once louder and more nuanced than those at less thoughtful restaurants with roots in Southeast Asia...

Make sure to try crunchy nuggets of cuttlefish, which answered the pesky question of how to give fried calamari a fresh spin. Easy: substitute a sea creature that’s a close cousin, but more delicate, and limit the seasoning of the rice-flour batter to salt and pepper.

Deserts and sides were the most notable weaknesses, but Nierporent is a man who starts with the benefit of the doubt--and so if there was a rounding error, up from one star, it went in his favor. [NYT] 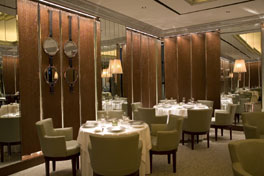 2) Alan Richamn is at Gordon Ramsay this week and his take echoes the general consensus: it's pretty darn decent.

Ramsay, 40, star of the TV cooking show "Hell's Kitchen,'' has carefully crafted a reputation as vulgarian and perfectionist, an enigma wrapped in an epithet, and his new place belies that image. It's mild-mannered, well-behaved and surprisingly old-world: so tame I have to believe the effect is precisely what the chef sought...

The room itself is lovely. Or daunting. Your call. It's a shimmering expression of austerity: windowless, nearly colorless, all silver and gray and glass with panels that gleam like mother- of-pearl...You might feel cosseted. You might feel claustrophobic -- worse yet, entombed.

Will he be back? Yes, but only with extremely chatty and entertaining pals. [Bloomberg]

3) Also, Paul Adams of the Sun files on Ramsay. He concurs:

[T]he experience never rises far above its baseline of unimpeachable adequacy. The name of the restaurant — Gordon Ramsay at the London — is typical of Mr. Ramsay's no-thanks approach to innovation. The aesthetic results in a sort of ironed-out, colorless elegance, with a minimum of surprises, pleasant or unpleasant...Mr. Ramsay's new restaurant manages to be extremely satisfactory, even luxurious, while completely omitting any aura of specialness that would make it stand out among restaurants in its price range.

And for those scoring along at home, such consistency all but assures three stars from both Platt at The Frank, Platt (who scores out of five) being a bit less tolerant of the hoopla. [NYS]