If you thought we'd get out of Thursday without blood running on the streets, you were wrong. It's an action-packed edition of The Shutter, which features reports on bar and restaurant closings around town.

1) West Village: Just a week after being declared too far gone to be worthy of Deathwatch consideration, Ametller may have shut its doors for good. Reports a reader, "When I walked by Ametller, at 35 Christopher Street, this afternoon, it was closed and there was a notice taped to the window stating that the marshal had taken possession of the premises." A temporary glitch, or the end of the line? The Eater oddsmaker says the smart money is gravitating towards the latter. [Shutter Inbox, previous coverage]

2) East Village: Another restaurant that's long lingered on the life/death verge seems to have crossed over as well: "I walked by Pop, Roy Liebenthal's sister restaurant to Pop Burger on 4th and 12th, and noticed that they have completely closed down. The place was stripped down and there was a notice on the door." This of course paves the way for the tapas restaurant that's moving into the space, which we hear already has the blessing of Community Board 3. [Shutter Inbox, previous coverage] 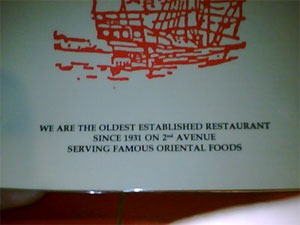 3) East Village: Blogger Lost City passes along news of more carnage in the Evil: "I just discovered that Jade Mountain, the classic Chop Suey joint on Second Avenue and 12th street (it's 75 years old, menu boast at right) has closed for good. The death of the owner last September seems to have done it in. I was there last week, but this week it's shut up and dark." A moment of silence, please. [Lost City]

4) Murray Hill: "We went by for quick mexican and Ixta was closed w/ lights out Saturday night - they are no longer on opentable?" Phone number: disconnected. Ixta: she dead. [Shutter Inbox]