Freud once said, sometimes a dish is just a dish, which, of course, implies that on the other hand sometimes it is much more. Such as in this chase, where a dish is The Dish. And here you were starting to shut-down for the day. 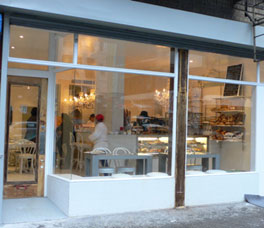 1) Caffe Falai: Iacopo Falai's newest venue opens today, this one a 40-seater with a combo bar/open kitchen. Breakfast with offerings such as Baked eggs w/ tomato sauce and buffalo mozzarella may turn out to be the ideal play here, at least until their SLA paperwork is straightened out and dinner service begins (projected for 'Spring'). PR jibber-jabber: "Iacopo Falai, chef/owner of Falai on Clinton Street, brings his distinctive talent to Soho with the opening of Caffe Falai. Located on Lafayette Street, Caffe Falai has 40 seats, 10 at the open-kitchen bar. The menu is casual Italian, with a focus on breakfast and lunch. Like at Falai, all bread, pastries, pasta and chocolate are made in-house, and the chef’s attention to detail is evident throughout the white, modern space." (265 Lafayette Street, Soho; (917) 338-6207) [EaterWire]

2) Black Pearl: The seafood shack, which is was a contender for Best Lobster Roll in its former digs inside East Village bar Julep, has re-opened (following a Plywood stint) in a space of its very own in Chelsea (26th between 6th and Broadway). Early signs indicate that most cylinders are firing and lobster roll pilgrimages are now safe. [Chowhound]

3) Nurse Bettie: Ultimately, this LES homage to the pin-up girls of the 1950s is just a bar, but it's a bar small enough that it will never fall victim to promoters and it's just down the street from Schiller's, from where you can have food delivered. The bar had an opening party last night and is open for business today. The Restaurant Girl has this to say: "These days a liquor license can be as difficult to get as a cab on New Year's Eve. But the Lower East Side's newest bar has not only done the impossible, but also seems to be rubbing it in the neighbors' faces. Not literally of course, but with $6 beers and top shelf drinks that max out at $9, Nurse Bettie's certainly stirring up a little friendly competition. (106 Norfolk St., LES: (917) 434-9072) [EaterWire/RG]

4) Kool Bloo: A Plywood kid makes good, per a tipster: "The Kool Bloo on 6th and Broome is officially open! If you thought the sign was "kool" during the day, wait til nighttime--the sign lights up my apt it's so bright." More on the open-24-hours Kool Bloo, which also has a location on East 23rd Street, from their website: "KOOL BLOO is founded on the notion that fast food should be healthful, satisfying and innovative. By creatively combining lean meats, fresh produce and natural ingredients we offer foods that you not only crave but that you also need to stay active and healthy. At KOOL BLOO our moto is no rules, just good food; that means you pick and choose your meal combination and we make sure it's delicious!" (117 Ave of the Americas, Soho; (212) 775-5665) [Eater Inbox]

5) Funky Diner: Shari Schneider and Michael Vitanza, who own Divine Bar East and Divine Bar West, opened their diner, which is a bit funky, last week. The usual diner specs go here, but one fact of genuine note: they are somehow serving 17 types of soda and 18 types of tea. (466 Columbus Ave., UWS; (212) 873-0600) [NYS]

6) Havana Central: The 100-year-old venue that was once legendary beatnik hangout West End Cafe, has re-opened as a branch of Havana Central. But no one is going to forget the place's roots any time soon. West End reminiscers are invited to stop in tomorrow (Friday) between 7 p.m. and 9 p.m. to record their memories on video. Free empanadas to participants. Chris Shott for the Observer has more on the restaurant's history: “The West End has changed hands a number of times and each owner has contributed to its ongoing evolution, but, essentially, they have all acted as caretakers of the legacy of what has become a New York institution,” Mr. Merrin said in a written statement. “As the latest in that succession I take my responsibility very seriously, which is why Havana Central at The West End will embrace a ‘burgers and beer sensibility’ along with a commitment to an authentic Cuban dining experience.” (2911 Broadway, Morningside Heights; (212) 662-8830) [NYS/NYO]

Which brings us to the small matter of the Dish that you've been hiding up your sleeve? How's about we cut to the chase?