Once in awhile—a great while—The Shutter brings not pain but the prospect of rebirth. Let's check in on three recent Shutterings that aren't quite what they seem. Hallelujah. 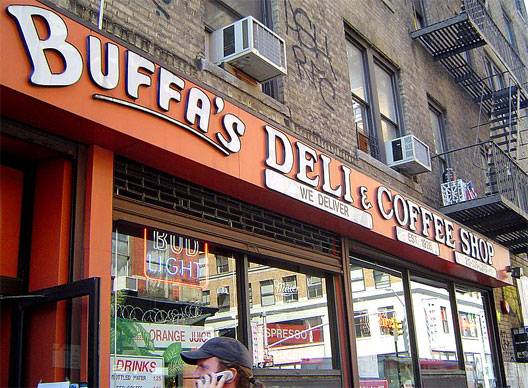 1) Soho: No recent Shutter has captured as much reader interest as that of Buffa's, the oldschool diner on the corner of Prince and Lafayette. Among recent missives to the Eater inbox: "I had seen them removing alot of equipment before the paper went on the windows. Not sure which exactly is happening"; "the windows are now papered over and DOB Work Permits for interior alterations are posted in plain view. Work was on-going today (Wed. 9/20), although the DOB WEBSITE page for this building show a STOP WORK ORDER. Any idea what is going to take Buffa's place?"; "Could this be an end of their 80 year run?"

SHUTTER STATUS: Closed for renovations. From Eater's Shutter report on Buffa's in early August: "The owner told me he's working with business partners to revamp the whole restaurant into something open later and on weekends... He didn't say what type of food, just that there would probably be some changes."

2) Upper West Side: We've run two reports on Le Caridad in the past few weeks, the more recent one wondering if what appeared to be a Temporary Shutter might be more permanent. Several readers have emailed to set the record straight.

SHUTTER STATUS: Closed for renovations. Emails one reader, "The for rent sign is on the expanded space (they bought the space next door and renovated a few years ago). I believe the construction sign is also in reference to putting up a divider of some sorts, and so if I had to wager they can't afford the rent next door and are just contracting into the original space. We'll see though." Sure enough, adds another reader, "I believe they’re keeping the main restaurant but closing down the adjacent dining room, explaining why there are two signs, next to each other, and covering 2 storefronts."

After the jump, jump into a sizzling Chelsea hotspot.

3) Chelsea: Though we took it with a large grain of salt, another recent Shutter report published a reader email wondering if floating danceparty The Frying Pan was sailing on to other shores.

SHUTTER STATUS: Closed for the season. Emails another alert Eater reader, "no worries. the frying pan is not going away. the grouping of ships is now or soon will be moved out, cleaned up and later reinstalled just upriver -- just the same as before. it is being moved to make way for more hudson river park, an expansion of the chelsea riverside park to be exact. here's more info."