Now wait a second. It's 9:35 and Eater has already posted the Week in Reviews, Listage, and, now, is Deathwatching Sascha? Is this some kind of insane double Deathwatch, MenuGate, Pinkberry, Week in Reviews laser light show extravaganza? Well, yes, actually. Get the second double espresso today; you're going to need it. 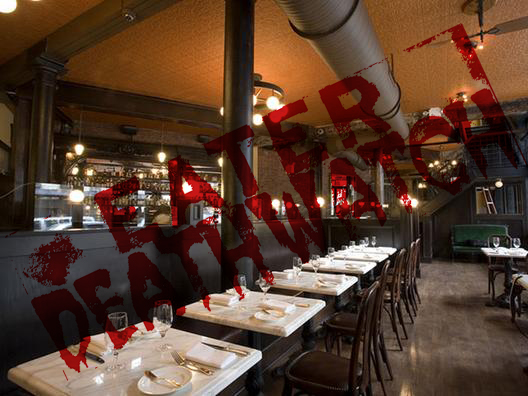 There are times when dropping the Deathwatch hammer is a carefully calculated, precisely orchestrated affair. The Deathwatch Committee pours over numbers, compares cash reserves to burn rate, inspects Resy density at 7:15 and 10:15 PM and averages booze dollars per banquette. Then, they put it all into an excel spread sheet, which is, of course, pre-programmed to spit out an exact shutter date. This is not one of those times. This is a simpler case.

Sascha, which opened respectfully enough out-of-the-gate in March will be lucky to see its first birthday. Massive service and quality control problems aside, there is the small matter of Sascha Lyon having departed. Pay close attention to the next few months friends, for every restaurateur's nightmare -- the great out of the gate press, followed by a critical beating, followed by staff departures and investor panic -- is in full swing. OVER/UNDER: January 2007.