A special Eater operative passes along the above spy photograph. What have we here? It's none other than the top floor of Ian Schrager's Gramercy Park Hotel, still under construction. Reports our operative, "The original hotel had an amazing wrap around roof terrace/bar. That is not yet open, and is currently under construction; here's a photo of the blueprints for what Schrager plans to do with the rooftop space. Construction has begun, but has at least a few more months to go (just in time for winter)." (Our operative labeled the areas he could figure out.)

The bar will be an A60-like retreat, but with far more stringent membership requirements. The restaurant, Park Chinois, will operate under the guidance of noted London chef Alan Yau. Reads the official word, "The roof can be accessed via a special, private, keyed-off elevator and is open 24 hours a day. The lushly landscaped private roof top garden features indoor and outdoor dining, a wood and gas burning fireplace, as well as private lounging and entertainment areas in an intimate and comfortable environment." Yowza.

After the jump, an underwhelming-yet-intriguing spycam peek at the service kitchen. 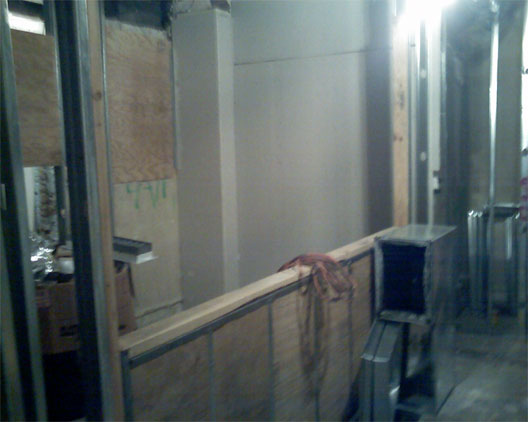