It's Plywood time, offering reports on restaurants that haven't quite made it to their soft openings yet. Seen something brewing in your neighborhood? Email along your report; bonus points for attaching digital photos. 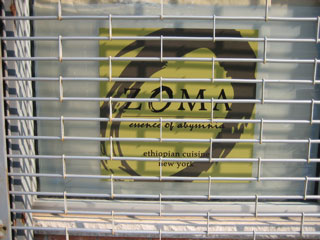 1) Harlem: Neighborhood blogger Harlem Fur reports, "Signs are in the windows at 113th and Frederick Douglas Boulevard for Zoma, a new Ethiopian restaurant. I called the number on the awning, but no answer yet." [Harlem Fur]

2) Midtown West: The chaining of NYC continues apace, reports a correspondent: "I was walking on 51st between 6th and 7th last week and saw a huge construction site, so I peeked in and saw it was a restaurant space. I made nice with one of the construction guys and they told me it’s going to be called Montana Grill, and it’s owned by Ted Turner. No idea when it’s opening, but a lot was done." [Official Site] 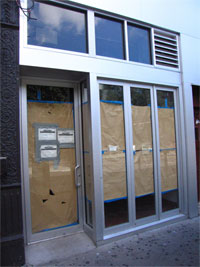 3) Park Slope: Slice's Adam Cuban submits this pic to the Eater Photo Pool with a report: "This place is on Fifth Avenue in Park Slope. Near 5th Street or so. I walked by it several weeks ago when the doors were open during construction. It had hot dog murals all over the inside, so I assume it's going to be some type of hot dog restaurant. Of course, since this is Park Slope Fifth Ave., the dogs will probably be $5 a pop." [Eater Photo Pool/Flickr]

4) Park Slope: More from the nabe via OTBKB, which updates on Tempo Presto ("a chic Italian cafe, gourmet take-out and gelateria") and Sweet Melissa's, which may be open by the time you read this. [OTBKB]

5) Tribeca/Time Warner Center: File this reader report under meta-plywood: "Got lunch today from the takeaway counter of Bouchon Bakery and noticed the wall just beyond Bouchon has a huge ad for a new Time Warner Center outpost of Landmarc coming Spring 2007, the ad directs readers to its website but there doesn't appear to be any info there."