The downward spiral of Jack and Grace Lamb's East Village empire continues this week as they announce, via the above storefront posting, that their Jewel Bako Makimono will be folded into the higher priced original, Jewel Bako just around the corner. Notes the correspondent who snapped this photo:

Attached are pictures from the window of the erstwhile Jewel Bako Makimono. It seems that the Lambs are once more steering away from sushi in their relentless struggle for the Meyership of the EV. It's probably too speculative to wonder whether Bruni's blistering review of the original Jewel Bako appended to the Degustation review played a role in this bit of 'strategery,' but nonetheless, speculate I will... It's also difficult to glean what we are to make of the statement "reservations aren't necessary."

The second half of the story after the jump. 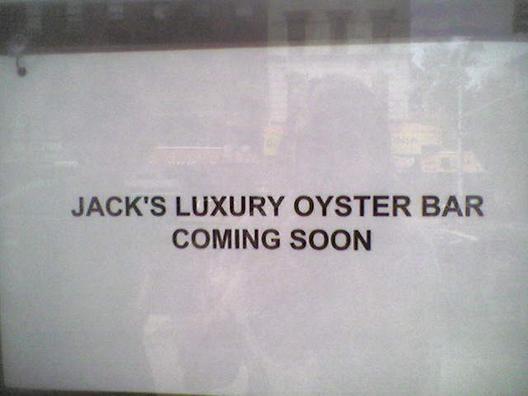 And in the second half of this latest chapter of the nose dive, the cult hit Jack's Luxury Oyster Bar will relocate from its cozy 246 East 5th Street digs to the more sterile space that was Makimono on Second Avenue. (N.B. The 5th Street townhouse is still listed with Corcoran, though now the listing does not include a restaurant, but instead a "chef's kitchen.")