Robuchon, who, of course, has restaurants of the same name in Paris, Tokyo and Vegas, is the "Founding Chef" on the NY venue. The Executive Chef responsibilities are those of Yosuke Suga, who had been running the Roppongi Hills Atelier prior to arriving stateside. Pastries are by Kazutoshi Narita and Satomi Kanai.

AJR is designed by Pierre-Yves Rochon in conjunction with Four Seasons architect I.M. Pei. To the press materials we go: "L’Atelier’s casual yet stylish décor engages a minimalist aesthetic with vivid red accents against a pearwood background. This dramatic color palette emphasizes the theatrical setting where diners, seated around a u-shaped wood counter, become the audience that faces the kitchen “stage” where the service team performs the execution of the meal."

Ahead, Kalina pulls back to reveal the entire room of what is, to date, the restaurant opening of the year. 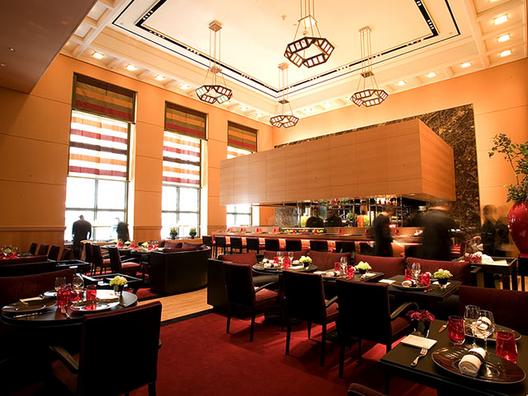 Further reading on the opening; on the Paris Original; and from DailyCandy.

Photos copyright 2006. All rights are reserved.