A day late and way more than a dollar short, it's more from The Shutter. 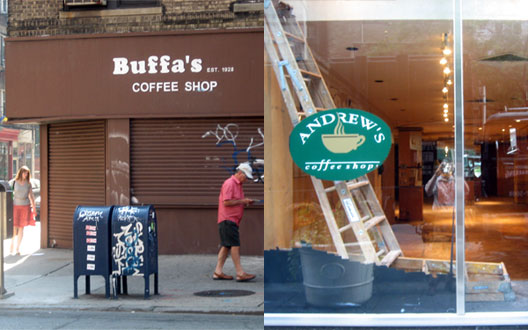 1) Soho: An Eater reader emails temporary diner shutter news: "Buffa's, an old school deli/diner open only during the day during the week, has closed for renovation. The owner told me he's working with business partners to revamp the whole restaurant into something open later and on weekends. I stumbled in yesterday in seach of a cold beverage and saw a hand-written sign behind the register and talked to him for a minute. He didn't say what type of food, just that there would probably be some changes." [AddYourOwn]

2) Midtown East: Carnage in coffee land. Another tipster (who was kind enough to send along both of the above photos) adds to last Friday's breaking report: "My daily commute takes me past Andrew's Coffee Shop--it is pretty much an empty shell already." [Citysearch]

3) Midtown/Chelsea: "Dunno if you're interested in nightlife closings, but Light and XL just bit the dust. XL is supposedly being replaced by a high-end bottle service lounge backed by Ivana Trump, just what the world's been waiting for." [XL Official Site, not loading]

5) East Village: We're wagering this is a temporary shutter, but for what it's worth: "Since it is like 6,000 degrees outside, I decided to stop off at the Avenue A Lucky Burger for a burger and some fries to take home for dinner. They're closed with some big legal document taped to the security gates. Truly an unfortunate turn of events. PS: Please make this tip anonymous - I'm mostly a vegetarian and my hamburger addiction is my last real addiction."

BONUS: In a tidbit perhaps more suitable for the mothership, a tipster adds some meat to the Chelsea Grill shutter reported yesterday: "Building is being torn down to make room for a high rise co-op. at one time that block except the corner co op was owned by the Ponte family (Pontes Restaurant and Pontes Trash haulers)--not sure if that is the case now." And so the circle of life continues.