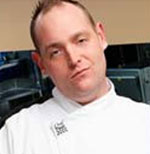 Eater has learned that Keith Greene, the favorite to win Gordon Ramsay's Hell's Kitchen, will take a dive next week (Monday 8/7) and be eliminated. This, so that he can stay in New York and take over Non-Frenchman Ed Kleefield's UWS canteen, Jean Luc (previously announced as closed for summer renovations). Greene will turn the venue into a Cajun-themed restaurant, ostensibly in the style of Kleefield's Mumbo Gumbo, just opened in Sag Harbor. The opening of the new restaurant is slated for September.
· Hell's Kitchen [Reality TV World]
· Hell's Kitchen: Keith [Fox]