Few openings have generated the kind of buzz afforded that of French maestro Joël Robuchon at his L'Atelier. Herewith, a roundup of the early word. We've ranked the critics in order of letter grade which, Entertainment Weekly-style, we're callously applying to reviews that don't actually use letter grades. 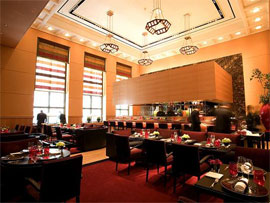 Jennifer Leuzzi: "This is old school cooking. By that I do not mean a dusty Escoffier recipe – I mean the hard-core classic techniques of French cooking. It is exactly the reason why cooks should go to school and stage in the great kitchens. It’s a reminder of the potential greatness of the classics, and why they endure... When am I coming back to eat again?" Grade: A.

Random Chowhounder: "We really enjoyed the casualness and elegance of the restaurant. The food was truly outstanding. I think it will be awhile until I eat here again but I will definitely be back if I can get in!" Grade: A-.

After the jump, the knives come out.

Random eGulleteer: "So is it a four-star restaurant? My answer is, I don't give a fuck whether it's a four-star restaurant. What I care about is, did I like -- I mean, REALLY like -- my dinner? The answer is, yes. Did I feel ripped off by the price? The answer is, no. (The FOOD price, anyway: I'm NOT happy about the beverage prices.) Is it the best restaurant in New York? I'm sure it's not -- but I don't see how that conceivably matters. What matters is that at least the tasting menu is well worth trying." Grade: B+.

Frank Bruni: "As it happens, my companions and I sampled the tartare and the toro and enjoyed both but didn’t go into an outright swoon over either... In a place with prices this nervy, servers should be able to keep unerring track of which dishes were ordered by which diners and put those dishes down in the right places. At times the servers didn’t... Many dishes had a simple but dazzling visual elegance, with precisely applied dots of color here or there, or with bold striations of ingredients. Looking at them, I felt a little thrill. And, yes, a definite sense of moment." Grade: B-.

Augieland: "There were a couple of Wows – like the crispy egg and caviar, and the lemon amuse – and there were zero Blechs, but on the whole the food seemed to lack by the slightest degree of seasoning, primarily salt, which left it in the middle of the road as far as fine cuisine goes; in the middle with obvious potential, but not at Wow." Grade: C

Ed Levine: "Maybe it was just too early, maybe we ordered wrong, or maybe this is another misguided line extension of one of the world's great chefs. At this point I don't feel the need to return." Grade: D+.