And then, on the fifth day, there was Plywood. As always, your sightings of unopened dining or drinking establishments around town are encouraged to the tipline. Our thanks, meantime, to this week's bevvy of tipsters. 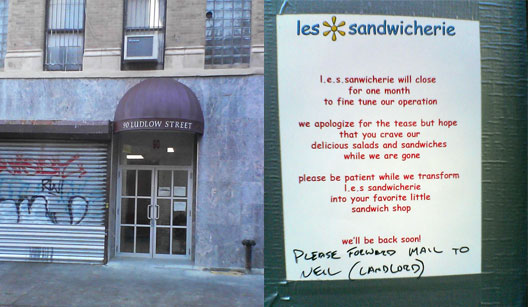 1) Lower East Side: A prolific tipster delivers a LES twofer. a) "First tip is about 90 ludlow st (above left) which as of now is a vegetable storage place. its around 3500 sq ft with basement. rent was going for $8500. i was walking down ludlow and noticed a small sign that it had went forth with procedures to obtain a liquor license. it appears another bar is coming to the LES." b) "Next is the LES Sanwhichere -- appears it has temporarily closed up (above right) only after being open up for less then a month. one interesting fact about the owner of the place, is that he was part owner of the now defunct Bar 11 on orchard. Hope failure isn't his blood." [PLYWOOD/RE-PLYWOOD] 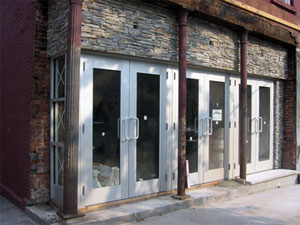 2) Carroll Gardens: Another twofer, these from Court Street. First, blogger A Brooklyn Life reports on the venue at right, "The bar that formerly was Sparky's at the corner of Court Street and Nelson Street is slowly revealing itself. Recently, the plywood covering was removed from the exterior to reveal a brand-spakin' new facade... Previous rumors have indicated the space will morph into a sports bar, any updates?" Separately, an Eater reader emails, "Well they’re opening a bar on Court and Luquer yay! Props to SoFo or whatever they decide to call it these days." [PLYWOOD x2]

3) Chelsea: "Just walked by the old Kavehaz/Satalla (26th btwn 6 & bway) and saw it closed with construction under way in the Satalla half. Asked the guy what was up. He said it was to be a lounge from the owners of Fuelray? Looks early in the construction stage, but not sure. No actual plywood though...but sawdust and men with drills." [PLYWOOD/DRILLS/SAWDUST]

4) Soho: Let us leave you with another update on a summer Plywood favorite: "I walked past Soho Park this AM and the paper is off the windows! Huzzah! Don't have a picture, but it looks very, very close to opening." Save us a seat at the picnic table. [POST-PLYWOOD]