Blue Hill pays 4-1 and a classic he said/he said on Chinatown Brasserie. Can this be? Might this be? What's all this then? Why, it's the Week in Reviews, of course. 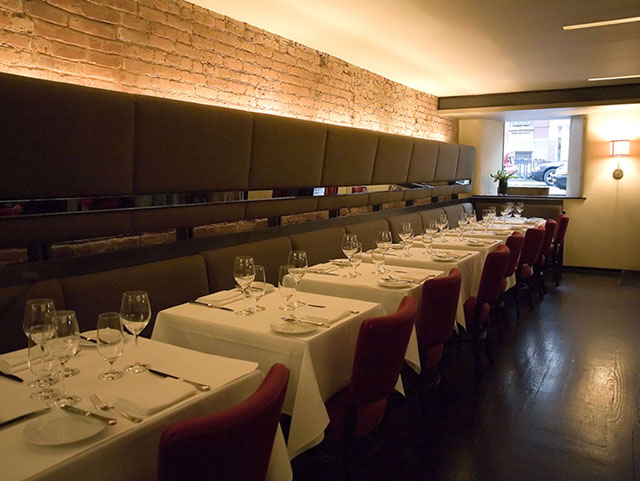 Perhaps no other chef in New York City does as enthusiastic an impersonation of the farmer in the dell as Mr. Barber, and perhaps no other restaurant makes as serious and showy an effort to connect diners to the origins of their food as Blue Hill. Here the meals have back stories, lovingly rendered by servers who announce where the chanterelles were foraged and how the veal was fed. It’s an exercise in bucolic gastronomy, and it might be slightly cloying if it weren’t so intensely pleasurable.

And more than ever Mr. Barber seems dedicated to making sure that those ingredients, along with the Greenmarket fare he uses to supplement them, don’t compete with flashy sauces or spices. Most of the dishes executed by him and Juan Cuevas, the current chef de cuisine at Blue Hill in the city, avoid excessive trickery or unusual flavor combinations. They pay clean, pure homage to nature’s remarkable bequests.

In the end, for all of his brutal two star antics, his appreciation for simplicity serves The Frank well. [NYT]

2) Paul Adams files a mostly favorable report on Noho hot spot Chinatown Brasserie in which he makes clear that Joe Ng is the thing:

the best food at Chinatown is the handiwork of Joe Ng, the chef in charge of dim sum. It's worth coming by at lunch, when a greater selection is offered, and making a meal of Mr. Ng's specialty, but the 20 dinnertime offerings show what he can do. He works in contrasts, filling fluffy, pale steamed buns with sweetly succulent roast pork ($8), and enlivening blandly earthy turnip cakes with spicy, shrimpy XO sauce ($6). The novelties stand out as much as the more familiar dishes do. Fried dumplings, of shrimp or pork ($8), are among the best I've had anywhere; scallops layered on top of shrimp on top of fried tofu cubes, in delicate little towers ($12), are less familiar but just as delicious.

Other comments relate to less satisfying entrees and the fact that Chinatown Brasserie is neither in Chinatown nor a brasserie. (Discuss.) [NY Sun]

3) On the other hand, Sietsema also passed through Chinatown Brasserie this week, however his take was somewhat different:

Chinatown Brasserie is a restaurant for people who are afraid of Chinatown, and afraid of flavor too. It occupies the space that was once the Time Café, only the mighty room looks bigger and more luxurious, arranged on two levels furnished with intricately carved furniture, looming red-and-white lanterns, and undulating banquettes. The grandiose and dwarfing decor makes you feel like a small kid in the company of your parents in a Chinatown restaurant circa 1975. Taking Ruby Foo's as its inspiration, Chinatown Brasserie is a theme-park rendition of a remote memory of Chinatown's past.

Though absolutely not a less-valid take, it's certainly not a surprise that the king of the culinary underground (including, of course, Chinatown) takes issue with a high-priced knockoff. [VV]