Two news items from the land below 6th Street on Avenue B. Join us as we queue up the Hellmouth's iconic photo once again... 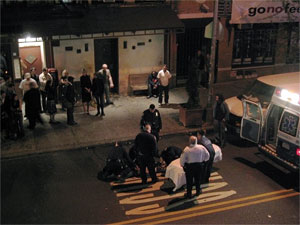 1) EaterWire reported a reader rumor last week that Le Souk's sister restaurant, Carne Vale, has been operating with the liquor license of a previous establishment. Now, journalist Paul Smalera digs in deeper, claiming Carne Vale's (also Le Souk's) owners are using a liquor license from "Carthage Palace," a joint that never opened and in fact filed for bankrupcty. Which brings us to where we are now in this excerpt from his longer piece:

Most recently, as Le Souk’s licenses have been marked “inactive”, parties and DJ nights are being transferred directly across the street to Carne Vale, negating the effect of the closure.

I guess the questions here are simple. Is the Carthage Palace license legal? What’s up with the bankruptcy?... Does anyone remember a Carthage Palace restaurant ever actually existing? What’s going to happen with Le Souk? It will be interesting to see what happens to the Jacob brothers’ Avenue B mini empire, if anything.

2) A few blocks down, an Eater correspondent reports, "At Croxley's Ale House, garden was just shut down next to the bar. Apparently, they never had any license to operate out there." Time to change that website, mates! (UPDATE: emails another reader, "Not quite right... that garden has been shut down ALL SUMMER LONG. Not sure exactly when, but I'd say since at least May.")