After dropping some Gordon in our last Plywood installment, today's preopen items are a bit less aggressive. Still, plenty of good wood, with thanks to our myriad tipsters around the city. Seen some plywood yourself? We'd love to hear about it. 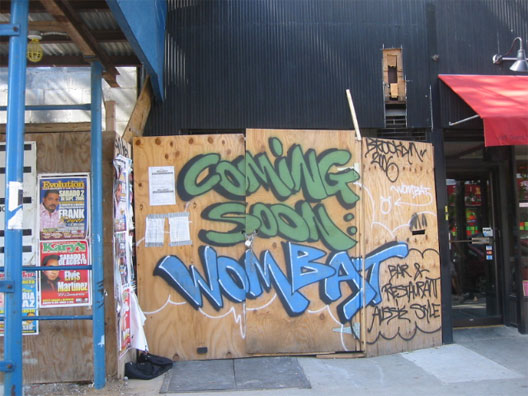 1) East Williamsburg: A tipster sends word, and photographic evidence (above), of the first plywood we've ever seen that deserves enshrinement on Streetsy: "I've been keeping my eye on an upcoming restaurant on Grand St. between Lorimer and Leonard. The plywood outside says Wombat, Bar and Restaurant, Aussie Style. It is sandwiched between the incredibly disappointing bar Artland and the average-at-best Lily Thai restaurant. Do you know anything about it? We need more tasty places to eat east of the BQE." [PLYWOOD] 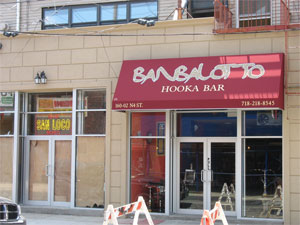 2) Williamsburg: More from the 'burg: "San Loco has been mentioned here before, but I couldn't resist taking a pic of it and its neighbor (right). This is North 4th between Bedford and Driggs." [POST-PLYWOOD]

3) Soho: "So there is definitely something going into the old Soho Cantina digs. I was bit inebriated walking home last night, but I definitely met the new owner (Eli, perhaps?) and he says that they are going to be opening up something 'with a neighborhood feel.' Take that for whatever it is worth, but that is pre-plywood and something to keep an eye on." [PRE-PLYWOOD]

5) East Village: The mothership beat us to the update on the groovy East Village lobster joint that obsessed us a few months back. Turns out it's not a restaurant after all. Says a tipster, "this morning I saw a new navy blue awning over the space just east of Ave A on Houston St (next to the big deli): Urban Lobster - Prepared Seafood to Go. Windows still papered over." [REMANDED TO STOREFRONTING]