Things may have slowed at bit here at the outset of summer, foks, but Dish is Dish; and Dish we must. Today, a three-pack, each with its own bit of big name pedigree. 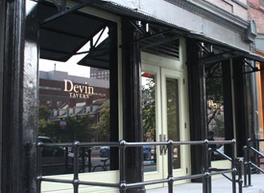 1) Devin Tavern: Tribeca plywood alum Devin opened yesterday. This is the rustic American concept from the fine folks of Dylan Prime fame (John Mautone and Michael Waterhouse). Chef Christopher Dunn's opening day menu is aggressive, with offerings such as a double bacon cheeseburger and ribs with Kansas City glaze. Ambitious, but a sure-fire hit with the banking set if he gets it right.

2) Intent: Initially slated for February, Francois Payard's Mediterranean opens to the public tomorrow in the former Bot space on Mott Street. Now the back yard is covered by, get this, a tent. Color is available from Urbandaddy and Kalina has been dispatched. NB, there are conflicting reports on the opening date, so do call ahead (212-966-6310).

3) Cafe Fuego: As the EaterWire had it last week, this Cuban spot at 9 St. Marks is days away. A tipster informs us that Halle Berry announced last night on the Late Show that she is dating the owner of the restaurant, adding, "It's probably safe to assume we will be seeing one of the most beautiful women in the world at the 'Fuego'." Also, they're hiring, if you want to go that route.