Per chance did you bring any Fabreeze to the party? That smell of Shutterage sure is pungent. 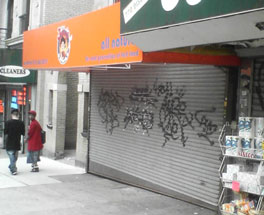 1) Washington Heights: "looks like Billy's Original BBQ in Washington Heights may have smoked its last. They were closed recently for a few days for "hood repairs," the second time in under a month. I called earlier today, no one answered and the voicemail box was full. And at mid-day Wednesday, when they are supposed to be open, the gate was down ..."

2) UWS: They fought the good, long fight, but business is doneski at neighborhood mainstay @SQC (who doesn't love a phantom website?) From the ground: "Apparently the folks at @sqc have decided that providing sustenance to the stroller set on the UWS is no longer worth killing themselves."

3) UWS: " Isola, a neighborhood Italian restaurant on Columbus Ave between 83-84th Sts., closed sometime over the past 2 weeks. Notice, now gone, on door said that they were closing after 15 years and thanked neighborhood for their patronage. Went by there yesterday, and the place was gutted. Sounded like landlord raised the rent beyond what the restaurant could support."

More carnage on the UWS and elsewhere after the jump.

4) UWS: Via a tipster, a shutter two-fer, including a crushing blow for the veggie set: "Zen Palette on Broadway at 76th street and Monsoon on Amsterdam at 81st street are closed." Re: Zen Palate, its official website does assure: "You can still order for delivery from our 46th Street location if you live below 90th Street and West of Central Park. In-Store dining is always available at our other great locations." Phew.

5) Flatiron/Murray Hill: Finally, in the category of it's about bloody time, "What happened to Scopa (Madison betw 28 + 29 Sts) (while it lasts)? It suddenly closed down, no warning, and now there's a "for rent" sign in the windows."

Has the gate come crashing down on a venue in your neighborhood? We're here if you want to talk it out.