Shall we get on with the Dish, then? Tasting Room, Brenner's Chocolate Playpen, Squre Pizza, and Dishage in a far off land called, "Brooklyn." Who said anything about a summer slowdown?

1) Tasting Room: It's about time we circled back to The Tasting Room, which is teetering on the brink of dinner service in its new Nolita digs. A top field agent's early report:

Drinks are very good – mostly highballs with fresh ingredients. Hand squeeze lemon and lime to order, they make their own tonic and cola. Their micro brew draft section was a real bonus; the Maine white beer and Pilsner were awesome. All industry crowd – not a day walker in the joint. The Dining room still very much under construction, but only they are “two weeks” away from full food. I’m curious to see if they can keep the quality up and do volume (roughly 4x the size of old joint). My prediction: great spot for the neighborhood, but they’re going to get crushed when they get blown up by every one at once (see white-hot foodie press crater Little Owl). 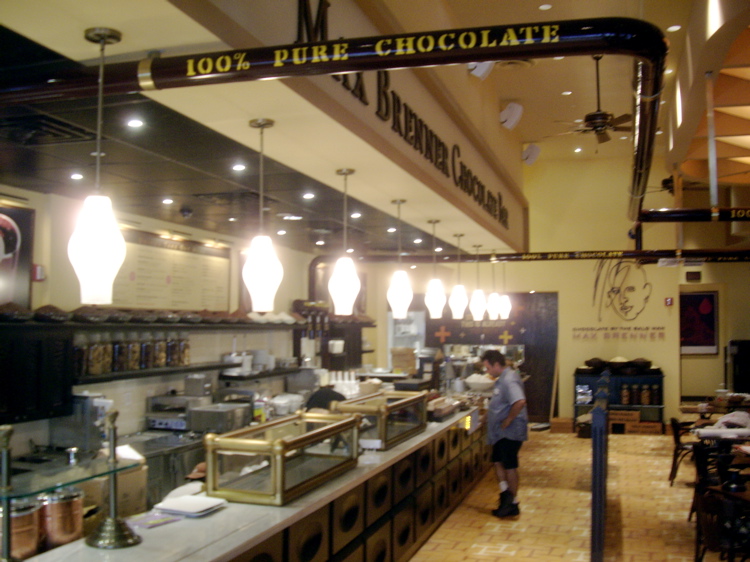 2) Max Brenner Chocolate by the Bald Man: Israeli candyman Max Brenner has opened his eponymous shop in Union Square. Flo Fab: "A retail area will have a display of decorated chocolates; big blocks of chocolate sold by the pound; dispensers for thick milk, dark and white chocolate creams and cocoa powders; assorted chocolate candies like chocolate-covered waffle wafers and nuts; and accessories for serving chocolate. It segues into a 150-seat restaurant on two levels done in tones of brown." [Flo Fab, Salli Vates, WhatISee]

“Our pizza is different, and not just because it’s square,” [Alba] says. “The crust is thin, with a consistent ‘krunch’ (hence the name); It’s far more substantial than the trendier varieties from other places, that Alba says remind her of “matzoh with tomato and cheese”....Krunch’s modern décor and its unforgettable “Hip To Eat Square!” slogan is sure to gratify even the most spoiled of taste buds."

And from non-PR materials: "I remember seeing some buzz how this was going to be a square thin crust pizza, and the crust was going to crunch. Well I thought the toppings were good, but the crust was a little to thick and had a gummy consistency...no Krunch. It is brand new, so maybe they are still trying to perfect their product." [Midtown Lunch, Official Site]

Up next, Brooklyn and the Bronx get their fair share of Dish too.

5) Bocca Lupo: A Plywood query answered: "The place on Henry and Warren in Cobble Hill is called Bocca Lupo (wolf mouth?). It's an Italian small plates-y place that opened last Monday. My friend and I stopped in for a quick glass of wine before a movie, and on a whim ordered a few bruschetta and a gorgonzola salad--quite delicioso. I think this may be a new, low-key yet stylish neighborhood haunt for me."

6) Farm on Adderley: On to the wild card of the bunch today: Flatbush’s The Farm on Adderley, named after the Cape Town thoroughfare of the same name. Owners are Gary Jonas and Allison McDowell and the chef is Tom Kearney. Little else is known at press time, though a nice graphic treatment and an interesting menu will likely draw some attention by Fall. Field reports welcomed, of course. Bonus Plywood: Photos of the venue build out are here.

7) Billy's BBQ: And, last but, arguably, not least, "Billy's BBQ are having a grand re-opening today according to flyers that were posted on all the cars in a 5 block radius yesterday. So it appears that they are off the deathwatch for now."