Fancy a check of the ol' Deathwatch? The Eater Hospice is just this way. 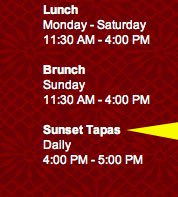 Barça 18
Status: DEATHWATCH; now offering "Sunset Tapas"
Time on the 'Watch: 18 weeks
Prognosis/Analysis: Hanson's constitution is strong, but the clock does tick. Watch for a death-by-reinvention in the form of lots of small 'tweaks'.

Jefferson
Status: RE-DEATHWATCHED as Jefferson Seafood
Time on the 'Watch: 18 weeks
Prognosis/Analysis: Owners have the pockets to roll the dice on one more fall season, but if they keep skimping at Cafe Asean to support the lemon, the whole enterprise may find itself marked for death. T-minus 2 months at Jefferson.

Itching to drop the hammer? Drop it, baby.