The Plywood this week is short, but the photos are sweet. Let's get right to it. 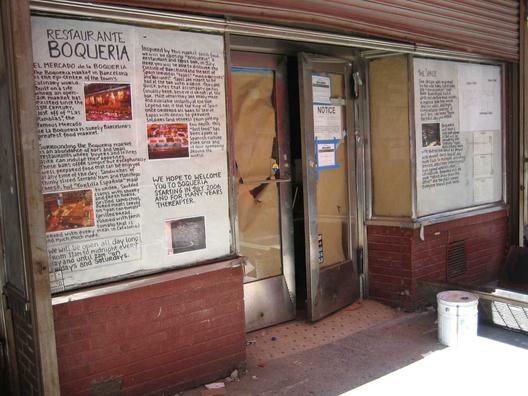 1) Chelsea: Please do pay attention. The owner of Boqueria—Suba co-owner Yann de Rochefort's new tapas joint in the old L'Acajou space—is offering an ongoing master class in how to do plywood right. Click on the above image to take in the prose in all its glory. [PLYWOOD] 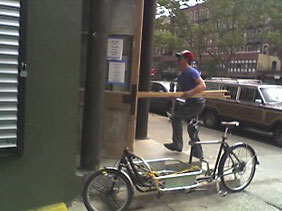 2) Lower East Side: No fresh details have yet emerged about enigmatic LES newcomer The Marshall Stack Restaurant, though an eagle-eyed tipster did catch this rare live-action plywood glimpse of 2x4s entering the restaurant (right) earlier this week. Though the interior is shaping up, we're not quite in post-plywood territory yet. [PLYWOOD]

3) Midtown West: Courtesy FloFab, news that Jeffrey Chodorow is turning the old Mix space into a steakhouse "specializing in American- and Australian-bred Wagyu beef." No chef, no name yet. [PRE-PLYWOOD]

4) Cobble Hill: An Eater reader emails, "I live in Cobble Hill, and over the past few months I have noticed activity on the corner of Henry Street and Warren. There used to be a cool little homegrown restaurant there on Henry called Sam's, just a storefront in from the corner, run by a feisty old guy who kept odd hours and made decent food mostly for employees of LICH and a few random neighborhood folks. But he closed up shop several months ago and his former space and the larger one on the corner have now been incorporated into one. The plywood/newspaper on the windows has been up for a while, but just last night I drove down Henry in a taxi and saw that the windows were revealed, a bar and stools were all set to go and they looked very close to opening. Do you have any idea what this place is all about?" [POST-PLYWOOD]

Seen Plywood yourself? The tipline eagerly awaits your call.