Week in Reviews 7/19/06: We have the Bruni said/Platt said on Le Cirque (they both said two stars), then another thinly veiled recommendation that Tom Collicchio finds his way off the reality show set, back into the kitchen at Craftsteak. Then the Elsewhere comes through big. Wheels-up, folks, here we go. 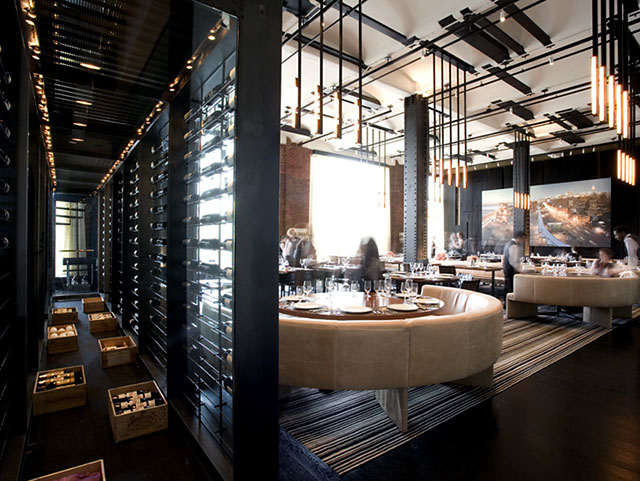 1) Per his marching orders from Sirio Maccioni, Frankie Two Stars two stars Le Cirque. Curious circumstance of the day: the review reads a lot closer to his zero star excoriation of Mr. Chow than any of his two star safety kicks. Observe:

[T]he restaurant itself is no longer an especially exciting one, at least not in its current incarnation. The new Le Cirque, in the Bloomberg Tower in Midtown, seems to be coasting on its myth, counting on the star power of Mr. Maccioni to compensate for a menu that could use more spark and a kitchen that could show more finesse.

It does a superb foie gras terrine, a sorry risotto Milanese. Its ethereal Dover sole meuniére makes you believe that this fish was put into the seas to await its appointment with butter and lemon. Its drab lobster salad makes you question the crustacean’s gastronomic calling.

In the end -- spoiler alert -- Bruni succumbs to the Maccioni pressure and defaults to high praise for 'tradition'. [NYT]

2) Oliver Platt's brother also goes to Le Cirque this week, and awards it two stars. But whereas Bruni took a great deal of issue with Sirio's disinterest in the general public, Platt, barely a man of the people, what with his celebrity sibling and all, uses a somewhat different lens to view 3.0:

During the course of his long career, Maccioni has employed his share of diva chefs and engaged in all sorts of culinary innovations. But he seems content now to take a kind of victory lap, to serve the food he himself enjoys, to mingle among the tables with his friends. This approach may find a new audience, but for now the old one is out in force. On the evenings I was there, the room was filled with ruddy-cheeked titans of industry (Sandy Weill, Teddy Forstmann), high-society raconteurs (Dominick Dunne), and assorted other ageless creatures of the New York social scene. They celebrate each other’s birthdays with cakes brought to the table under domes of spun sugar and toast each other with endless flutes of champagne. “It’s the oldest kind of restaurant in the book,” said Uncle Frank, as we watched Maccioni circulating around the room, dispensing his papal greetings, grinning his timeless platinum grin. “It’s a family joint.”

Not an altogether bad take, of course, provided one understands that buying into this family is a pricey proposition. [Le Cirque]

Ahead, the 'failure' that is Craftsteak and Elsewhere as far as the eye can see.

3) Paul Lukas at the Sun digs in at Craftsteak and, like others who have reviewed before him, find a mostly agreeable restaurant with one massive shortcoming:

Almost everything else at Craftsteak is terrific. But there's no getting around it: A steakhouse that serves mediocre steak — no matter what its provenance — is a failure.There's a reason why meat and fire are considered such a classic combination. By taking the fire out of the equation, Craftsteak has engaged in an ill-advised attempt to reinvent a wheel that was turning just fine on its own. And no amount of grass-fed, dry-aged hullabaloo can change that.

'Failure', for the sake of scoring, falls somewhere between zero and negative one star. [NY Sun]

Elsewhere, Meehan at Chrisie's Jamacian Patties, Lady Strongbuzz at Cafe Condesa, Tables for Two at The Good Fork, Sietsema at the Gowanus Expressway adjacent Spartan Souvlaki, Gridskipper waay out on a limb at Maremma, Gourmetro at Great Jones Cafe,