Summer tends to be a quiet time for restaurant openings, but even in the heat, The Shutter never sleeps. If these Eater reader reports are to be believed, this was quite the week of carnage in the restaurant trade. Buckle up. 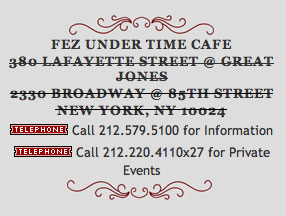 1) Upper West Side: This first one is a blow. Multiple reports rolling in that must have John McDonald salivating. Here are two: a) "Saw the staff at Time Cafe/Fez (2330 Broadway @ 85) rolling out equipment yesterday afternoon. Sign on the door says it is closed for good." b) "The fez & time cafe on 85th & broadway has closed! There was a signin the window saying so, and employees stacking up chairs for good! So sad, I love fez! It's the end of an era!" N.B. no word yet on Fez's official site, so we added the strikethrough for them.

2) Upper East Side: "Just noticed that Ian Restaurant at 322 E. 86th St., closed. It had been dark the past few times I walked by, then I checked the website and saw their goodbye message."

3) West Village: "so sad. bivio is closing. supposedly will be taken over by fredericks. not final yet. but such a shame." [Official Site, no word]

4) East Village: "The restaurant Share on 9th between 1st ave and Ave A closed within this past month."

5) Lower East Side: "The bar Maradona on Allen/Stanton has a sign on it that says it is 'temporarily closed.' I guess the grand (re)opening was actually a grand closing."

After the jump, a Shutter reflection on Tribeca's long-shuttered Della Rovere and a ray of hope for the Upper West Side's Monsoon. But first, emergency temporary Shutterage in Midtown West thanks to our friends at the Health Department; it looks a little something like this: 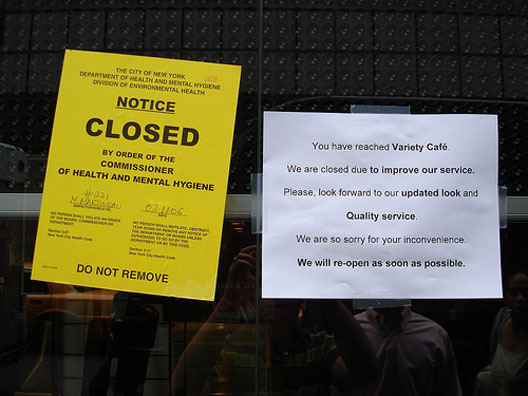 7) Midtown West: Midtown Lunch filed this most excellent report on Wednesday: "48th St. between 5th and 6th was a madhouse today at lunchtime as shocked (and not so shocked), but mostly confused lunch’ers attempted to eat at Variety Cafe… which has been closed by the Health Department. The funny thing is, they hung a sign next to the Health Department notice, claiming to be 'closed due to improve our service.' The sign went on to implore eaters to 'look forward to our updated look and quality service… We will re-open as soon as possible.' Apparently 'updated look' will be the Variety Cafe, without a Health Dept. Closed notice on the front." [Midtown Lunch]

8) Tribeca: "Just curious if anyone had heard why Della Rovere had closed. And even more curious to know why they haven’t removed their things from the restaurant since they closed back in February! They still have meat slicing machines, awnings and everything else as if they were opening up again."

9) Upper West Side: Finally, because in all death, there is rebirth: "For what it's worth: I walked by Monsoon -- which was mentioned as being closed along with Zen Palate recently on the site -- this weekend and there were signs taped up to the windows that said they're actually closed for renovations and will reopen soon."