Before we surrender to the calming zephyrs of The Beach, let's go crazy and do up our second Plywood installment of the week. Spotted telltale evidence of a yet-to-open bar or restaurant in your neck of the woods? Join our merry team! 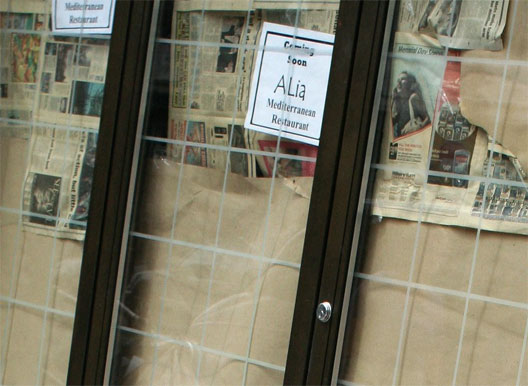 1) Williamsburg: Photoblogger Will Femia snaps the above pic of Alia, reporting, "I thought the above pictures meant that North 6th St. is adding some Mediterranean to the menu, but this makes it look like they were expected in Fall of '05, so maybe 'coming soon' is a relative expression." [A Test of Will/PLYWOOD]

2) Upper East Village: Emails an Eater reader, "Wonder if you know anything about what's going on our block. Last week some fancy awnings went up indicating the new restaurant would be called Eleven B but I can't find anything about it in the usual places. They have been working on that space for quite some time. (They also have a 'to go' awning a few doors down called Eleven B Express. We're hungry for a new eatery in the hood." Developing! [PLYWOOD]

3) Lower East Village: Says another tipster, "Last night, there was a Veselka sign on the shack in the park at 1st and 1st. More signage around the park this morning makes indisputably clear that it will indeed become a Veselka outpost." [PRE-PLYWOOD]

4) Soho: Finally, because it just isn't a Plywood Report without an update on Soho Park, the Lafayette and Prince newcomer, we're indebted to Gridskipper for word that managers expect the joint to open in about three weeks. Click on through for a dramatic glimpse of the evolving interior. [Gridskipper/PLYWOOD]