Feast your eyes on this, a laaate Thursday afternoon edition of the Dish. You know you want it. 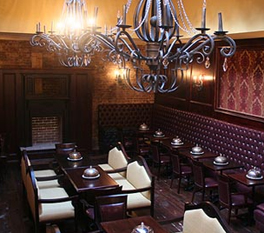 1) Gin Lane: In the always popular style of new-old school, Gin Lane (right) has soft opened on the West Village/MePa border, in the former Village Idiot space. Dark wood and an air of history are the main attraction here, with a cocktail list by the legendary Dale Degroff. Food offerings are along very traditional lines and include such classics as Oysters Rockefeller. Official public opening happens on Monday; semi-private downstairs to follow. [Urbandaddy]

2) Trestle on Tenth: It's hard to say exactly what the fuss is about, but this week's buzz award goes to NoMeat/West Chelsea newcomer Trestle on Tenth (hat tip to The Hall Company). Ralf Kuettel is the chef and will be preparing market-fresh Swiss and Swiss-french fare. The Plywood alum is in the space that formerly housed Chelsea Commons. [Daily Candy, Off the Menu, Thrillist, Urbandaddy]

3) Outlet Koca Lounge: From the inbox, we have Dish from the ever-changing world of Orchard Street nightlife. "Walked by a new place at 76 Orchard bet. Broome and Grand today, mentioned in February plywood -- but now instead of just "Outlet," it is called "Outlet Koca Lounge," and they are doing a shabu shabu thing. The guy working inside (well, not really working, since no one was there) saw me peering through the window and invited me and my friend in. The burners on the table are some sort of fancy thing that only heats up when something metal is placed on it. Cute back patio. No liquor license yet but they've applied. Also, because I mentioned that I live two blocks away, the guy gave me a card for 15% off."

4) L.E.S. Sandwicherie: Another reader special: "I saw today that the place that was once Broome Doggs is now "L.E.S. Sandwicherie." Nothing too exciting on the menu, just salads and sandwiches, both hot/pressed and cold."

Don't be shy. There is no such thing as bad Dish.