The week in reviews, 7/12/06 edition: Craftsteak takes it right in the applebag, while Chinatown Brasserie, Sfoglia and Little Owl do not. Let's get into it, shall we? 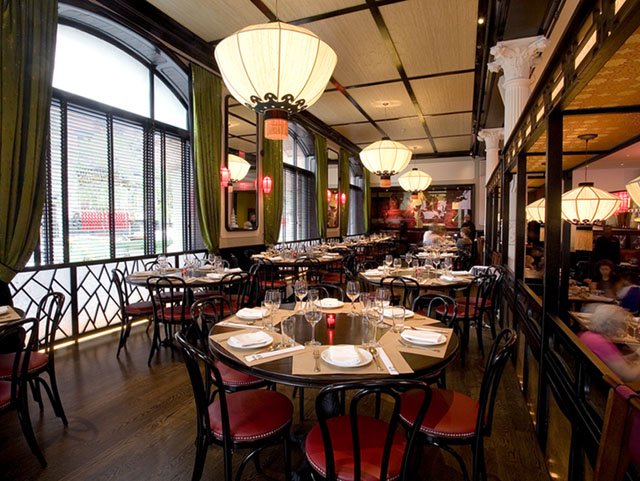 1) First up, Frank Bruni files his long-awaited review of Tom Coliccio's Craftsteak. In bringing the hate, he wastes very little time. The open:

The line between freedom of choice and the tyranny of too many options isn’t such a fine one. There were any number of moments when the chef Tom Colicchio and his collaborators on Craftsteak, yet another new mega-restaurant on the edge of the meatpacking district, should have realized they were crossing it.

Then, the kid drops the hammer:

Forget the omnivore’s dilemma; this was more like the carnivore’s discombobulation. And that would have been less irksome if it had been more delicious. But apart from the Wagyu beef, which was so pricey that being tasty was less an accomplishment than a contractual obligation, the steaks at Craftsteak proved disappointing.

To be fair, Bruni had mildly good things to say about the non-steakhouse offerings, but with steak being the point, that bit is a day late and a dollar short. All-in, one teensy tiny star. [NYT]

2) Next, we have Moira Hodgson over at the Observer, who pens a two star special on Chinatown Brasserie. Walking the line like it's her job, she brings good news and bad news. The good news:

Mr. Ng’s dim sum, with thin, silky wonton wrappers, are wonderful, from the subtly peppery wonton soup, the snow-pea leaf and shrimp dumplings, turnip cake and crisp pork pot stickers, to the Shanghai-style soup dumplings with broth inside, topped with flying-fish roe. The soup dumplings are infinitely better than the ones I’ve had at the overrated Joe’s Shanghai.

The bad news is in a variety of areas, such as service. Finally, by way of the ultimate reviewer hedge, Hodgson says in closing:

I did have wonderful evenings at Chinatown Brasserie, once I got over the size of the check—twice the price of Chinatown.

Ahead, Platt at nabe joints Sfoglia and Little Owl; and in a monster Elsewhere, we hear from Meehan, Strong, Levine, Nosh and, get this, Augieland.

3) And, thirdly, Adam Platt gets on the 20-seater bandwagon (rather a good bandwagon, in fact) awarding three and two stars to Sfoglia and Little Owl, respectively. On Sfoglia:

I ordered the antipasti (fennel salad, asparagus frittata, salami) and a helping of stewed red peppers with a crumbling of amaretti. I spooned the peppers onto a slice of thick toasty bread and took a bite of frittata. I chewed in contemplative silence. I took another bite. At some point, I may have closed my eyes in a fit of exaggerated foodie reverie. It was the best damn thing I’ve ever tasted. Hyperbole aside, that’s what dining alone on good food will do.

Fans of the Harrison will recognize the grilled New York strip, which Campanaro muffles in a pile of radicchio sautéed with pancetta. The pork chop is a variation of the legendary Red Cat chop, embellished here with hints of fennel, a tangle of dandelion leaves, and soft Parmesan-soaked butter beans. The fish of the day I sampled on one visit was a giant red snapper, served with the head on, with a chaste bowl of olives and celery on the side, and the chicken is suitably crispy and garnished with a toss of asparagus and home fries.