Share All sharing options for: EaterWire BREAKING REPORT: Shopsin's On the Block

Folks, we've got so much Wire coming your way in the next couple of hours that we'd better get started immediately. If we don't, we fear the whole system may very well -- metaphor alert -- short circuit. 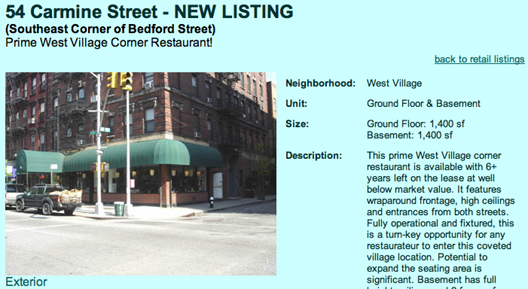 At the end of March, there was talk of Kenny Shopsin packing up his legendary West Village restaurant and heading to Brooklyn. The talk, however, subsided and turned out to be just another example of the quirkiest restaurant proprietor in the land having some fun with the local media. But just a few nanoseconds ago we were alerted to this, an actual lease offering for 54 Carmine Street, ground floor and basement; or, Shopin's. One must conclude that Kenny has one of two things planned: retirement or a move to Brooklyn. In either case, the clock is now officially ticking on the Carmine Street institution.
· 54 Carmine Street NEW LISTING [Sinvin]
· Shopsin's [shopsins.com]