Well, look what we have here. It's some Friday Dish, sure enough. You don't want to fight it, friends. From afternoon BBQ to illegal after-hours, this here is what you crave. 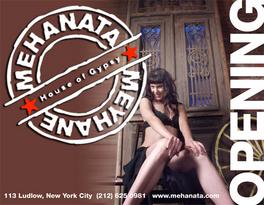 1) Slavic den of inequity Mehanata reopens tonight in its new -- and disappointingly accessible -- ground floor digs at 113 Ludlow. We've received a (let's just say) cloudy report on the soft open last night and it sounds about right. Looks like they're picking up right where they left off. [Slavs of NY]

2) This weekend is the 4th Annual Big Apple Barbecue Block Party, Danny Meyer's yearly pig parts gorging extravaganza. Some of the country's best pitmasters are firing up their smokers and grills as we speak in and around Madison Square Park. Levine has the pre-game coverage you're looking for, but beware he's a teensy bit partial to Chris Lilly of Big Bob Gibson Bar-B-Q, who may or may not ship him whole pork shoulders from time to time. Oh, and just like at Shake Shack there is a VIP option available here, in this case called the Bubba FastPass. [official site]

3) As promised, Zak Pelaccio's "malay-carts" have begun to roll at 230 Fifth. But they're not carts so much as they're serving trays and it's not Pelaccio so much as it's Pelaccio-designed, at least as of last night, when Eater dropped in for a surprise inspection. But, as far as bar food goes, it a significant step up from microwaved sliders. The crowd, on the other hand, is a different story.

4) Planethailand 212 has opened on 24th Street in the Flatiron. Anna Pop's menu culls highlights from various Asian cuisines, from pad thai to sushi, which does help explain the Brooklyn original's massive popularity. Here is to hoping that the birthday party crowds don't swarm now that it’s in Manhattan. [Eater Inside]

And what of your dish? En route, we assume?