It's a rare new media roundup day at Eater. We've got the lanuch of an Italian magazine, news from our good friends Tim and Nina, a bar book and a broadband website. Let the media consumption begin. 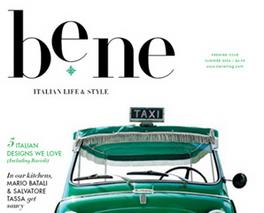 1) 'Italian Life & Style' magazine bene has just released its premiere issue. As any self-respecting Italian magazine for Americans would do, they've included an article on Mario. But there is also less predictable fare, such as the story of how the owner of Gnocco married the woman he hired as his hostess. The editor is Joanna Goddard. Though the magazine is newsstand-priced at a fairly hefty $6.95, it'll also be available at upscale Itals city wide. [bene]

2) Zagat now offers menus with 570 of their NY restaurant listings, with more to come soon, surely. They've gone with a formatting close to that of Menupages (leaving Menupix with the menu scan approach all to themselves). The Zagat archive at this early stage has close to a 100% overlap with Menupages, but the race for updates will be entertaining to watch. Let the cross referencing fun begin. [Zagat Menus]

A bar meal guidebook and an online 'video insider's guide' afte the jump.

3) In offline guidebook news, @ the bar is a new volume that lists 30 upscale venues where you can, yes, eat at the bar. The first edition includes bar classics such as Gotham and less obvious picks like Bellavitae. Though it is by no means comprehensive, or even satisfyingly thorough, there are smart, original suggestions here for those who enjoy the occasional bar meal. [@ The Bar]

4) As noted last week on Curbed, the video-based Turn Here is now live. Officially launched this past Monday, it comes with the promise of being "the video insider’s guide on where to go and what to do." At the outset, their content seems to favor historic and institutionalized venues and neighborhoods, which is an approach we applaud. Brad Inman is behind it. [TurnHere]