Today's edition's a doozy. Buckle up and strap in: we're in for a wild EaterWire ride. 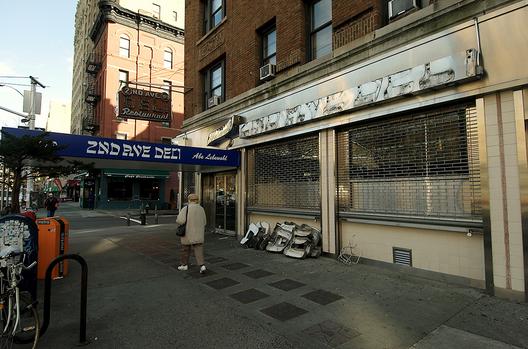 · More news on a possible 2nd Avenue Deli return. From a sorely-missing-matzoh tipster: "As someone whose life (actually, whose stomach)has been a bit less full (and whose heartburn has been a bit less intense) since the sudden closing of The Second Avenue Deli on January, I've been calling on a monthly basis for an update. The place has never officially closed. The woman who answered the phone on Thursday held out hope that the Second Avenue Deli could reopen, that the owner was in Israel for one of his children's wedding, and that a decidion about reopening could be soon—by the end of the month." Hmmm. [EaterWire Inbox]

So. Much. More. After the jump.

· Brothers Barbeque is closing for renovations. A tipster reports, ominously: "For the past week, Brothers Barbeque on Varick street has been closed with brown paper covering the windows. Sometime over the past couple days a note was placed on the door stating that they are closed for "a bit of renovating - see you soon." It seems that renovation has been the kiss of death for many Village/Soho restaurants lately. It will be interesting to see if this one actually comes back." [EaterWire Inbox]

· FloFab checks in with the usual scoopage: "Laurent Tourondel is planning another edition in his BLT franchise, which includes BLT Steak and BLT Fish. He and his partner, Jimmy Haber, plan to move into the space now occupied by Atelier in the Ritz-Carlton on Central Park South. No date has been announced, and Atelier remains open" (Paging Deathwatch...) She also reports that Fig and Olive plans a 200-seat branch in MePa this fall, and that the owners of Tocqueville plan to turn the restaurant's original 15th Street home into a Japanese restaurant. [Off the Menu]

· Because too much East Village falafel is just barely enough: "Mamoun's Falafel is opening on St. Marks. It appears to be under construction." [EaterWire Inbox]