You thought we'd roll into an epic long weekend without leaving a little Plywood behind? No sir. As always, if you've seen a restaurant swelling towards opening in your neighborhood, we'd like to hear from you. 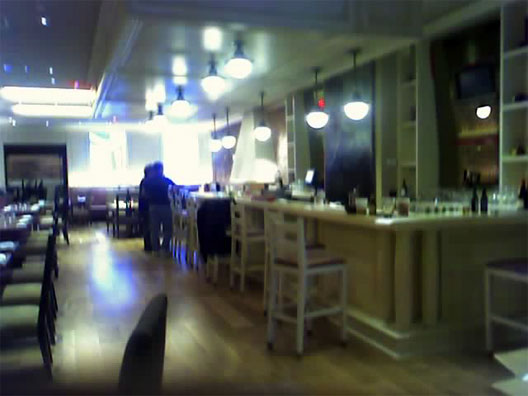 2) Soho: A tipster offers up an exciting two-part report. a) "The old Bot space on mott st. between prince and spring that was supposed to be renovated several years ago, but has since been sitting empty, looks to be reborn soon as INTENT. Construction has been under way in the past few months and the interior looks almost there - lots of warm woods. Not sure when it is slated to open, but surprised there hasn't been more speculation about this. Wonder if it's still under the same owner (Danny Emerman of Bottino)?" b) "Answered my own question - it is Francois Payard's new mediterranean joint. Slated to open June, I guess they now mean July!" [PLYWOOD/POST-PLYWOOD]

3) East Village: "Contrary to your report in May that the now-dead Kiev would become a Greek restaurant, this appeared on the restaurant's site in the last 24 hours (right)." In a word: ugh. [PLYWOOD]

4) Soho: Emails a reader, "My mini-obsession, as you may know, is the new place on the southwest corner of prince and lafayette. Anyway, I walked by this morning and noticed two new changes. The cast-iron fence that goes around the outdoor area now has a sign on the top of the gate that says SOHO PARK. Nice. ALSO! There are two picnic tables out in the yard area. This could be the greatest place ever!" [PLYWOOD/POST-PLYWOOD]