For those of you on the left side of the aircraft, if you look out your windows you can see The Dish. Do have a look. 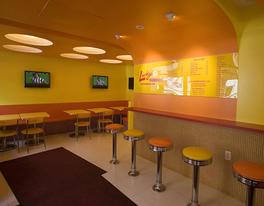 1) Lucky's Original: Though it has stiff competition in Burger Joint and Prime Burger, there should be room left for Lucky's Original, an outpost of the East Village original Original, just opened on West 52nd Street. Burgers range from healthy to cardiac arresting. Digs, at right, are throwback. [TONY]

2) Bondi Road Fish and Chips: The LES pre-plywood alum is now soft-open. A report from the scene: "shutters were up so i stopped in and asked what was going on. the nice man told me that they won't be serving food until the 22nd, but that they're open for drinks now. then he gave me a business card and told me to register for the mailing list. since the card says "a week of free partying," you can bet that i just signed up. i'm such a sucker if the even the vaguest prospect of free/discount booze is dangled, sigh."

4) D'or Ahn: As reported in the Wire last Friday, things are a-changing at lower 10th Avenue sliver D'or Ahn. Savory Tidbits has more: "After closing temporarily to makeover the menu, D’or Ahn will re-open as an Izakaya-style restaurant. An “izakaya” is a Japanese bar or pub, popular with the after work crowd. According to Lannie [Ahn], the restaurant will be more comfortable and casual; a place to go with friends for a drink and great Japanese small plates. The menu will be a traditional izakaya menu consisting of sushi, sashimi, tempura and yakitori." The opening is slated for 'very soon'. [Savory Tidbits]

Before you logoff for the weekend, is there any dish you'd like to unload?