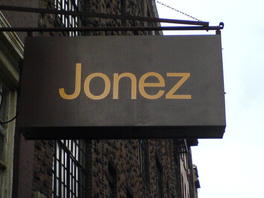 As you may recall, Jay Plumeri's Jones became Jonez in October of last year. The name change in response to a lawsuit brought against Plumeri et al by the owner of the Great Jones Cafe, who, as told to us by one of Plumeri's investors, accused Mr. Jay of "stealing his concept." But, it turns out that to make the lawsuit go away the name would have to be dropped altogether. So, guide book editors especially, please adjust your records: the venue will now be called 41 Greenwich. Says the investor, "The money/time [Jay] didn't spend on fighting Mr. Great Jones, is going towards a 2nd restaurant planned for next year, his first baby that is due in 3 weeks, and to additional improvements to 41 Greenwich. We're really sorry about all the name changes."

Jay Plumeri was served a law suit, last November 29th of 2005, by the same guy that has been threatening him since the day he opened Jones. The owner of the "Great Jones Cafe" that legally trades under that very name, decided that Jonez with a Z would still conflict with his own establishment and accused Jay, in a suit filed in the Federal court, of "stealing his concept". He wanted Jay to pay him an obscene amount of money in damages. Although we've never stepped foot in his place, or ever given it any thought (I always thought it was a lumber yard) Mr. Great Jones, isn't so great. He's a poor, unfortunate man who is obviously overrun with insecurity. Rather than work hard and focus on his own backyard, as you need to do in the restaurant business, he preferred to blame someone else for what must be a flailing business.

Nonetheless, to have a case heard in the Federal court will cost in excess of $40,000 in legal fees on top of what was already spent, along with most probably the next year in court. Jay has a very sound case and was advised that he would win, but at that price everyone loses. In the final legal agreement signed by both parties, Jay paid him nothing, accepted "no wrongdoing on any level" and agreed to drop the use of the name Jones or Jonez, if he dropped the case. Unfortunately if you're served a law suit in the USA, you are compelled to retain a lawyer to make something go away, even if you're innocently minding your own business.

Calling the restaurant 41 greenwich avenue, was our way of saying that the name or (no name) has no bearing on the success of the restaurant. People frequent a place not because of the name, but because they like it. The money/time he didn't spend on fighting Mr. Great Jones, is going towards a 2nd restaurant planned for next year, his first baby that is due in 3 weeks, and to additional improvements to 41 greenwich.

We're really sorry about all the name changes. Its been horrible having this thing loom over our head and to have been selectively victimized for doing absolutely nothing wrong, but as you know by now, Jay tries to pick and choose his battles. We are confident that this is finally over and we look forward to a lawsuit- free life along with some lovely new additions to our Spring menu.

Thanks for your interest.
Kind regards,