As much as we adore the Gowanus Yacht Club, every so often the place comes in just under our ideal fancy-o-meter. Which is why we were thrilled to receive this latest report from a very special Eater operative, detailing GYC owner James Mamary and Jason Clement's latest Smith Street outpost.

On Smith St., Gravy, the super-cheap diner connected by both vicinity and owner (James Mamary) to LaRosa and Pacifico, has added a Pacific St. entrance to its back garden, and named the spot Trout. (Boat would have been a better name if only .... ) They're serving a modified menu of Gravy— "burgers and snacks—but with cocktails," says a waitress. But with $2 PBR cans, Mamary is hedging that it'll be adopted as the North Smith outpost of his Gowanus Yacht Club —but with oysters on the half shell! (Makes sense—we are just a little fancier up here.)

It's official; spring has sprung. 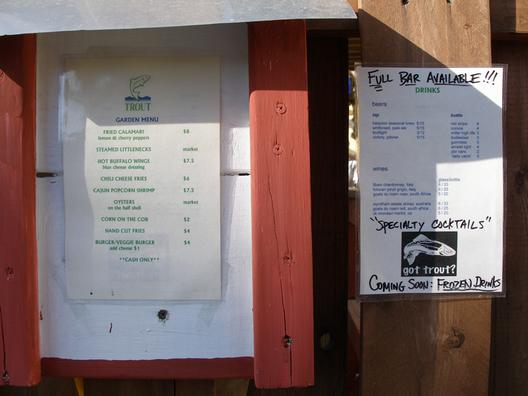