The Shutter reports on restaurants and bars that have closed their doors for the last time. Seen a closure in your neighborhood? We'd like to hear about it.

1) LES: First off, Orchard Street pioneer Orchard Bar has officially closed (though it has been opened only sporadically for more than a year). A note from behind the bar: "Orchard Bar at 200 orchard st. closed last Saturday. The lease was up after 10 years...the rent is going from $3,000 to $10-12,000. Oh well...one of the first bars on the LES (along with Max Fish), gone at last. Know of anyone looking for bartenders? I need a job...." 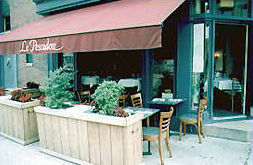 2) SoHo: Next, we move to King Street, where we find an old standby has fallen. "Kaput. Le Pescado...Bad taxes, bad bartenders, drug busts, no money for suppliers, buying food from delis.... (what I hear)." (Yikes.)

3) UES: On to Madison, for an example of the close tie between a name change and the Deathwatch, even if Bruno Jamais is involved. "Cafe B formerly Barbaluc, 135 E. 65th (Park/Lex) has been shuttered all week. I walked by it everyday on my way home from the gym at night, it was never crowded even after the name change and attempt to be "hip". Think they tried to get a younger crowd in there, even set up outdoors tables, but the food was mediocre for sky high prices. Great space. Hope something good and cool opens up in our staid neighborhood!"

Ahead, two West Village shutter victims and a drug bust on the UES.

4) West Village: Mainland India, the latest in a string of Indian restaurants to occupy at 289 Bleeker is doneski. "Does anyone know what is going on with Mainland India on the corner of Bleecker and Barrow streets in the west village? Since Monday there has been paper in all the windows and the interior has been gutted. That location is a black hole for Indian restaurants (Mitali West and Rangoli have both gone out of business in the same spot), but I thought Mainland India had been doing pretty well."

5) West Village: Lemongrass Grill at 7th Avenue at Barrow appears to be victimized by the Shutter as well. No answer on the phone and the windows are papered. Those who want to hold out hope can: The signs have not yet been removed, so perhaps it's just a renovation.

6) UES: Let's end with some fun, shall we? "MARTELLS ON EAST82 CLOSED FOR DRUGS? Closed because of drugs! Lets find out more!" Got the dish on this thing? Anonymity assured.