Starting to lay out your weekend? Hang on a second. We've got some thoughts. 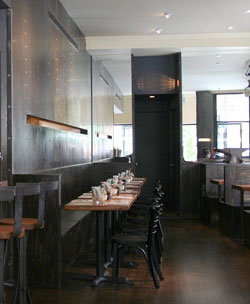 1) Plywood alum Ditch Plains (pictured at right) opens in full this coming Monday. Until then a semi-public soft open is in effect, with tabs being discounted 25% on account of the fact they're still working out the kinks. Recall this is Marc Murphy's (of Landmarc) homage to the east coast surf spot of the same name in Montauk. It's not exactly a clam shack, but you can expect plenty of comfort food, including lobster rolls, mac n cheese, fried clams, pies from Little Pie Company, and, the early standout from our visit, a char-grilled burger. Breakfast, paper coffee cups to-go, and wi-fi are all included in the concept as well. In the spirit of historical context, Ditch Plains opens in the space that was Yumcha and Bar d'O. [Gothamist, Thrillist, URBANDADDY]

2) Dirty Bird promises to start delivering sometime in the next few days, though there's no real way of knowing what's what without placing a call (212-620-4836). If you want to play it safe until AVR has a chance to work out the kinks, the chicken fingers, though not perfect, are already quite satisfying.

3) We don't have every last detail on this one, but the basic idea is that the downstairs lounge at Del Posto has been turned into a more casual dining room. That's right, folks, there is now dress-down on the cruise ship! What was the lounge is now an enoteca of sorts, serving a changing menu of a couple pastas and both cured and cooked meats. Is this the sign of things to come for the entire restaurant? You decide.

Ahead, clubland and a preview of next week.

4) In clubland news, The Plumm is reading for it's big moment. This is Noel Ashman's follow-up to N/A on W14th St. More celebrity partners this time around, including Damon Dash, New Kid Joey McIntyre, and Chris Noth. Open to the public via guest list upstairs, membership only-ish downstairs.

5) Oh, right. There's also Buddha Bar, which we've taken the liberty to Deathwatch for you. It finally throws open its doors on Little W12th St this weekend. The scene will likely be celeb-heavy for at least a week or two, should you be looking for that sort of thing.

And for you planning junkies who are starting to slate next week (or can sweet talk your way into weekend tastings), here's what we've got: Cleveland chef "Michael Symon makes his NY debut at the Greek Parea (212-777-8448) in the Flatiron; Choice: Kitchen and Cocktails (212-779-1830), from the owners of Remedy and Uptown Tavern, opens in Murray Hill; and last but certainly not least, Colicchio's Craftsteak is set to open in NoMeat on Tuesday.