Kids, do you like the plywood? Very good. Settle in and get comfortable, because we've got quite an afternoon of it on our hands. In fact, it's not a stretch to say that we've got a plan. 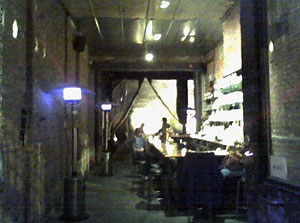 Let's start with this little gem to our right. (Immediately award yourself one point if your recognize the space on sight.) A tipster sends that pic, timestamped Monday night, informing us that as of earlier this week, the Bar on Little West 12th between Paradou and Cielo, alternately referenced around these parts as Le Jardin de Thrillist and The Garden on Little West 12th, is open for business.

We'd reported last month in a plywood report that the space was being taken over by the Barolo empire, but it's unclear what this incarnation is. Still: it's open, and now you have your backyard venue for the next three days. [POST-PLYWOOD/SOFT OPENING]
· Plywood Report: Unnamed Barolo Project in Meatpacking [~E~]
· Last Open Air Venue Standing: Garden on Little West 12th [~E~]
· Le Jardin [~E~]