Share All sharing options for: The Weekend in E.U.: 20% Off! (Saturday), Temporarily Closed! (Sunday), Not Closed! (Monday)

Silly you for thinking that just because it was a holiday weekend the E.U. news ticker would slow. This Monday morning brings us three tidbits, of, arguably, increasing severity (or inevitability). 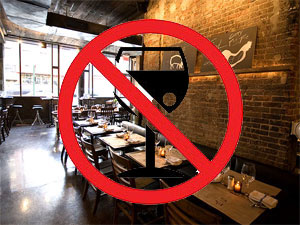 1) Bloomberg's Ryan Sutton gets in on the E.U. action. Not only might he have been the last person to sip the sauce at the gastrocafe, but he has also scored perhaps the best owner quote to date. When asked how the restaurant will manage pre-booze, Jason Hennings replied, "With a great level of difficulty." Cheers.

2) "I went to EU last night and was told that, to make up for having no liquor, the whole place is 20% OFF. Indeed it's written in big flowing script on the windows: "20% off while we wait for our beer/wine license." (I guess that they've downgraded their ambitions.) Seriously, they are desperate. My friend and I showed up at 9:30--after failing to get a table at Moghador, of all places--and the place was almost empty: not more than twenty-five people there. When we left an hour later, there was almost nobody left. And 20% off or no, I think that the creme fraiche + bacon + onion tarte flambee made me ill.

3) Lady Strongbuzz: European Union, the gastro-pub that opened last week as a BYOB, will close temporarily until it can get a liquor license. Strong emails an update: "Today I was told they are not going to close, but that they are in a holding pattern, and still remain open and are deciding whether to close. So as of now, they remain open. What will happen tomorrow, I have no idea."

And so ends part one of our story. Tomorrow begins the patient wait for Bob Giraldi's pockets to shallow.