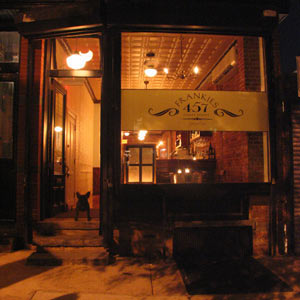 1) Frankie's Spuntino 17 Clinton St is scheduled to tomorrow (initially slated for last fall), "blessedly breaking Supper's chokehold on cheap and good Italiano in the hood," as one Eater diehard put it. The menu here promises to be identical to that of the original.

2) Niall Grant, owner of Aussie hit Tuck Shop writes us re the opening of his second location: "Hello, Just wanted to drop you guys a note to say that we have opened our second Aussie meat pie shop, this one on West 49th st between 8th Ave and Broadway. Lincoln (the baker) and myself used to work at the Spotted Pig but left to open an Aussie meat pie shop on East 1st street and 1st ave about a year ago. Since then we have gone from strength to strength to such an extent that the "ROBs" from New York Magazine today referred to the "burgeoning meat pie industry" "infiltrating the fast food market". Stop by for a taste of the future of fast (er ... quick service) food. Sorry we don't have a big publicity company handling all this but we are just a couple blokes with a dream and not a whole lotta cash trying to do it on our own." Sob. The new location is at 250 West 49th Street (212 757 8481); the original, 68 East 1st Street (212 979 5200).

3) As NY Mag, Strong and The Real Estate all report, Colin Devlin's Dressler is in soft open across the street from Peter Luger this week. This is Devlin's first foray into Serious Cuisine, on the heels of his hugely popular DuMont. Though you should expect there to be a price point increase here, DuMont's burger will be offered at Dressler too. Strong is quite taken with the space; Kalina has been dispatched.

4) At 109th and Broadway, Rack & Soul, has opened to much fanfare. Well, for that area, at least. Expect southern staples at this, the third restaurant from the folks who brought you Bayou and A Slice of Harlem.

Up next, Lenny's, Quality Meats, and Carne Vale. 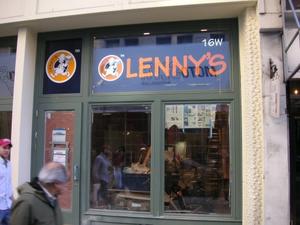 5) Lenny's opens another addictive sandwich shop this week, this one on 23rd between 5th and 6th. For real Lenny's junkies, there will be an opening party on Wednesday. No, sandwich shops don't usually throw opening parties; yes, this one has a publicist.

6) Last week, Quality Meats opened somewhat quietly, having awarded NY Mag with the exclusive. QM would be the latest installment from Alan Stillman and, now, his son, Michael of Smith and Wollensky Restaurant Group. The interior of the former Manhattan Ocean Club is by the E.U. design team of AvroKo, which proves that not all of AvroKo's venues open without liquor licenses. On the QM menu is a combination of steakhouse classics and luxe touches, such as steak sauce prepared tableside.

7) Aaaaand, finally, Carne Vale has opened on Avenue B across the street from its older brother, the completely unbearable Le Souk. Why even mention it? Well, friends, because it's fully operational - and licensed - and just one effen block from E.U.

Got some Dish you need to get off your chest? There there.