1) West Village: Courtesy of an Eater reader, it's our first look at the rebranded exterior of the former Chez Michallet. As previously noted, it's to become Little Owl, helmed by chef Joey Campanaro, late of Pace and Harrison. [PLYWOOD] 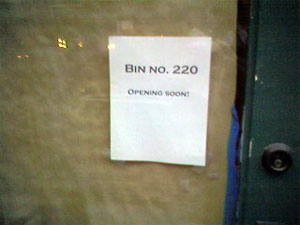 2) Financial District: An Eater reader emails, "Time Out reported Bin No. 220 opening 'this week' in March 30 issue. Tried to go there last weekend. Will be weeks if not months before opening. Under construction. Don't believe the hype!" Photographic evidence at right. [PLYWOOD]

3) East 20s: "The establishment that's taking over Tatany's former place is Choice: Kitchen & Cuisine according to the building crew. Menus should be up by now to advertise, but work won't be done for a few weeks. Looks nice so far." [PLYWOOD]

4) Fort Greene: Brownstoner's got the scoop, and photos, of Choice, a new restaurant coming to the Grand/Lafayette nexus. [PLYWOOD]

5) East Village: We've saved this gem for last. Do savor: "Not sure if you guys are familiar with sasabune in LA. single best sushi i've ever had, hands down. like, shit-your-pants good. they used to be in a dumpy former mexican restaurant, but moved into fancier digs several months ago to accomodate demand. was out with a buddy last week and ate there four times that week (i cannot emphasize how ridiculous this sushi is). spoke with the chef and learned they are shopping around for a space in the east village. he was asking if it was better to go more expensive for a 'popular' location in the east village, or somewhere cheaper and a little out of the way. luckily i was able to talk some sense into him... no one needs this amazing sushi restaurant beside, like, telephone bar on 2nd avenue. anyway, he thinks they will be opening within the year if all goes well, and is now trying to figure out how to deal with the new york fish people. it is 'very much more difficult.'" [PRE-PLYWOOD]

6) Central Village: Augieland sends along the above photo, noting, "this is that place that i never went into or even learned the name of on the east side of 5th ave at 13th street. next to the 2 story deli, that every now and then you would see a rope and bouncers outside of. apparently soon it will have good food."