As Friday dawns, an update on the continuing, um, evolution of the downtown bar scene...

1) Signs point to see-ya at Mehanata, the legendary Bulgarian Bar just off Canal Street. Reports Slavs of New York: "Mehanata is closed permanently as the building gets converted into a Ramada Inn. But now the fave Bulgarian bar is promising to reopen soon at a new location on the Lower East Side -- no details yet on exactly where they'll end up." [Slavs of New York via Gawker] 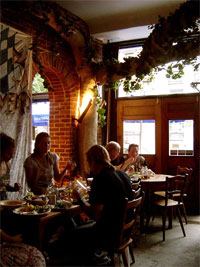 2) The Villager updates the saga of Avenue C's embattled Zum Schneider: "Zum Schneider is being accused of, among other things, excessive noise, attracting vermin and blocking the sidewalk entrance to the apartment building." If the landlord wins the fight to terminate the lease early, the beergarden could close as early as this summer. [The Villager; Curbed; Official Site; Flickr photo by roboppy]

3) An update on the Tribeca mosque proximity situation that might cost Cercle Rouge, Bubble Lounge, and Tribeca Tavern their liquor licenses. Unnamed Cercle Rouge manager professes serene confidence: "Everything is okay. Right now the thing is between the lawyers. We’re waiting." [Downtown Express]