When word came from a special Eater correspondent this afternoon—"E.U. Looks very open. Waiters, lit candles, tables set, glassware sparkling. Previews? Maybe. But I bet anyone feigning to be from the neighborhood could score a table"—we hit the byways straight to East 4th Street and Avenue B. Sure enough, as of 7pm tonight, the windows and doors were swinging wide and the tables set at the gastropub, long locked away while the dispute over its liquor license raged on.

They wouldn't seat us: friends and family only tonight. Official opening "around April 7" a man behind the bar said—the same date Juli B. noted earlier this week. Given the fact that everything looks so damn ready, though, we'll echo our special correspondent and give better than even odds that persistence over the next seven days scores you a seat.

So damn ready, of course, except for one pesky trifle: still no liquor license. Here's guessing that BYO plus gastropub fare plus AvroKo design makes this one of the spring openings. After the jump, another view of the action tonight, plus links to the copious pre-open Eater coverage of E.U. 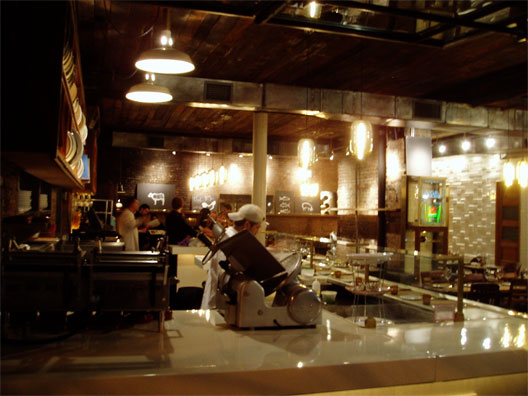