The updates keep rolling in on yesterday's update to last Thursday's installment of The Shutter, Eater's regular report on restaurant closings. Still with us? Onward...

1) Lower East Side: Café Juanita, home of the reader-lauded Hangover Brunch, is slated to shutter on April 2. Rebirth, however, is in the cards. Notes an Eater reader, "Heard from the owner (Australian; also owns Sunburnt Cow) that Juanita will be re-opening as a Sydney-style fish restaurant. He made it sound fantastic, but I guess we'll see." Very nice. 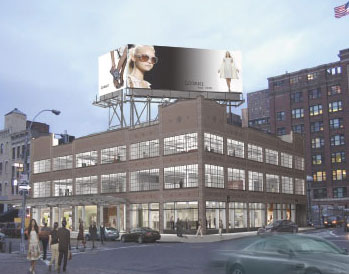 2) Meatpacking: Regarding yesterday's rumor about the reported upcoming deaths of Markt and Hog Pit, we were reminded that our brethren at Curbed have covered the situation with Western Beef's closing and the building (which holds Markt) conversion that lies ahead.

As for the Hog Pit, a reader adds: "Yep, they are going bye bye. Hog Pit messed up though because they were offered a large buyout awhile ago and turned it down. Oh, and FYI: rumor for the rent on the Markt space: $38,000 per month." (Flyer here, image above) Paging Kamali...

3) Gramercy: A week after the Great Aiello's Fire of 2006, the conspiracy theories roll in like the tide: "The fire was indeed at Aiello's. But here's the real story -- there was a fire at Empire Szechuan RIGHT NEXT DOOR three days before. Both are now shuttered. AND the mysterious Farkas Films studio next to Aiello's on the other side is ALREADY SLATED TO BE TORN DOWN. I am a neighbor and the Aiello's fire took place on a Sunday afternoon so we could all watch it. The speculation in the entire crowd was how suspicious the whole set-up was. Whatever the cause of the fires, if they try to do something to the Rodeo Bar, I'm leaving town!"